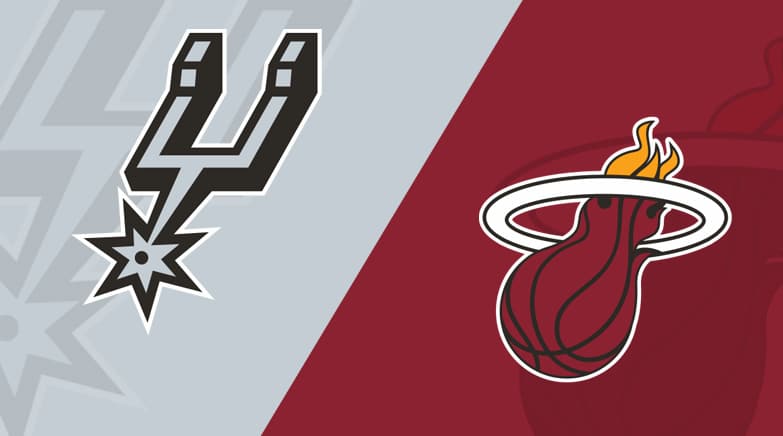 The Over/Under (O/U) for the game opened at 221 points with Miami set as a 1-point favorite.

In the Heat’s last game, they covered the 1-point spread against the Oklahoma City Thunder, 115-108. The combined points for the game (223) were over the O/U total of 216. The Heat held the Thunder to an offensive rebounding percentage of 13.3 (below their season average of 19.9). The Thunder had a free throw rate of 0.190 (below their season average of 0.227). Miami rallied around Jimmy Butler, who contributed 14 points, 10 rebounds and seven assists.

The Spurs lost a close one to the Atlanta Hawks in their last outing, 121-120, despite being 9-point favorites. The game’s combined points (241) came in over the projected point total of 230.5. Atlanta’s effective field goal percentage was their largest advantage over San Antonio. The Hawks had a rate of 0.616 (above their season average of 0.504), while the Spurs posted a mark of 0.500. San Antonio’s DeMar DeRozan finished with 25 points, nine rebounds and nine assists in the contest.

This is the second game of the season between these two teams. In the first, the Spurs lost 106-100, unable to cover as 5-point underdogs. DeRozan recorded 30 points, seven assists and five rebounds. The game finished with a total of 206 points, which was 13.5 points below the projected point total of 219.5 points. Miami had a much better offensive rebounding percentage (18.6 vs. 12.8). San Antonio, meanwhile, did a terrific job of making free throws (12-15; 80.0 percent).

San Antonio should be expected to protect the ball well in this contest. San Antonio ranks fifth in the league at avoiding errors (turnover percentage of 12.3 percent), while Miami forces the seventh-fewest turnovers (13.1 percent). Moreover, the Heat, who rank 24th in offensive rebounding percentage (21.4 percent), might struggle to get put-back points against the Spurs, who rank fourth in defensive rebounding percentage (79.5 percent).

Miami averages 25.2 assists per game, which ranks 11th in the league. San Antonio ranks 25th in assists allowed per game (25.5).

Over its last five outings, Miami is 3-2 ATS with 4 overs and 1 under.

San Antonio is 2-3 ATS with 3 overs and 2 unders over its last five games.

The Heat’s average margin of victory in their last five games has been 4.0, up from 3.9 for the season.