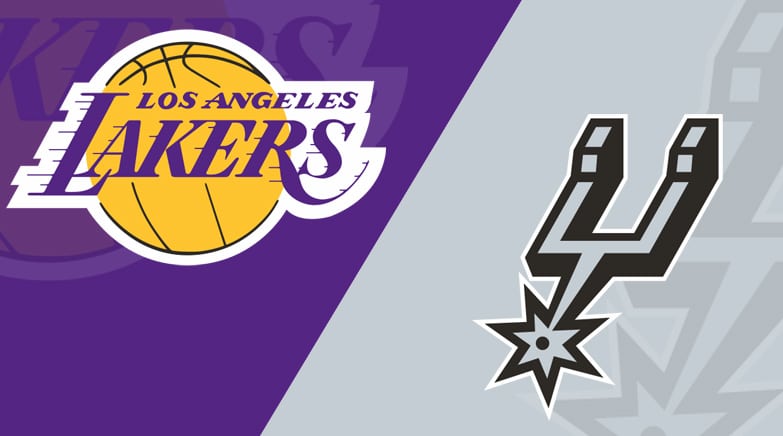 The Los Angeles Lakers continue their 2020-21 campaign Wednesday night in San Antonio, taking on the 2-1 Spurs as 6-point favorites on BetAmerica Sportsbook, so here’s my best betting pick along with the latest team news and stats.

The reigning champs are 2-2 on the season and will look for their fourth straight victory over San Antonio. The Lakers easily won their previous two games at AT&T Center.

Los Angeles has disappointed its fans last time out

The Lakers are coming off a surprising 115-107 home loss to the Portland Trai Blazers this past Monday. They were outscored by nine points in the fourth quarter, as the Lakers failed to cope with Damian Lillard who finished the game with 31 points and five dimes.

LeBron James led the way for the reigning champions with 29 points, nine boards, and six assists, but he had little help from his teammates. Anthony Davis went 6-for-14 from the field, accounting for just 13 points, while the Lakers’ bench combined for 23 points and five assists.

Dennis Schroder had a good game against Portland, tallying 24 points along with four boards and four assists. He’s posting 16.8 points and 5.5 dimes per game, while five Lakers players are averaging points in double figures including Montrezl Harrell and Kyle Kuzma.

After beating the Memphis Grizzlies 131-119 on the road and the Toronto Raptors 119-114 on the home court, the San Antonio Spurs dropped to 2-1 on the young season with a 98-95 defeat at the New Orleans Pelicans last Sunday.

The Spurs covered a 5-point spread and are 3-0 ATS this term, but they blew a nice opportunity to stay undefeated. With 4:15 to go in the fourth quarter, the Spurs had a one-point lead. However, they scored just four points for the rest of the way.

DeMar DeRozan leads the way for the Spurs, averaging 21.0 points and 9.0 assists per game. Six more guys average points in double digits, but LaMarcus Aldridge has been a big disappointment thus far, recording just 12.0 points and 4.3 rebounds a night.

With both teams still trying to gel things early in the season, this game could easily go either way. However, the Lakers have dominated the Spurs lately, so I expect this trend to continue, as Los Angeles should be keen to bounce back from a lousy performance against Portland.

Look for Anthony Davis to have a much better game this time and dominate the Spurs in the paint. San Antonio has been solid defensively so far, but the Spurs will have a mountain to climb against the Lakers’ inside game.

Still, I don’t feel comfortable with a 6-point spread even though the Lakers have won each of their previous three games against the Spurs by seven or more points.

The over has hit in 13 of the last 18 encounters between the Spurs and Lakers, but with the line at 230.5 points, this one is a tough wager. I’ll take the under, as the Spurs shot the ball poorly last time in New Orleans, while the Lakers will have to cool down a bit after making 39.2% of their 3-pointers in the first four games.