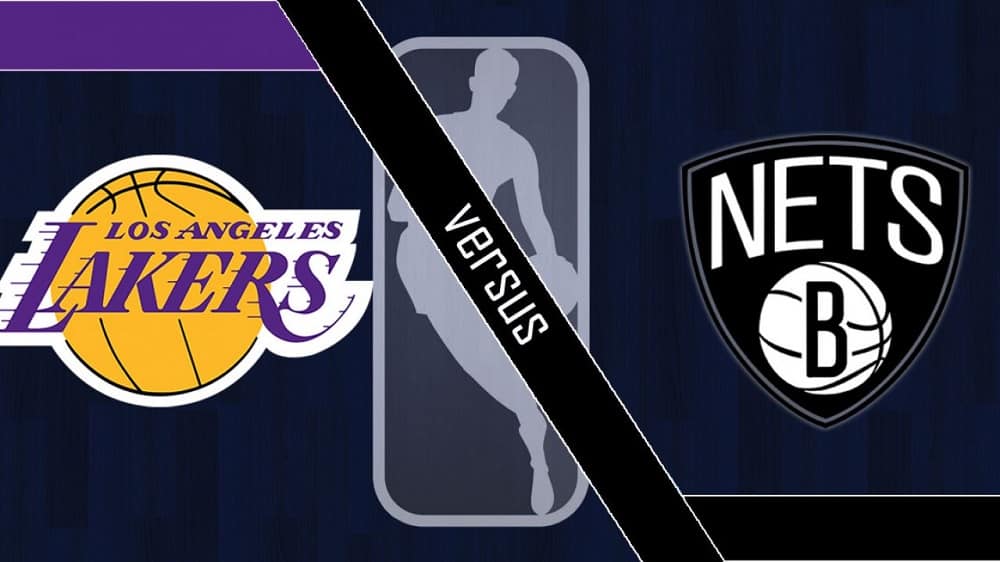 The highly-anticipated showdown between the reigning NBA champs and the runaway favorites to win the title in 2021 is set for Saturday night at Barclays Center in Brooklyn, so here’s the best Lakers vs. Nets betting pick along with the latest odds, team stats, and news.

The Nets opened as massive 12.5-point favorites on BetMGM Sportsbook. They are without James Harden (hamstring) and Landry Shamet (ankle), but the reigning champs miss both LeBron James (ankle) and Anthony Davis (calf), so it’s no strange that bookies consider the Lakers as huge underdogs in this game.

The Lakers continue their road trip quite shorthanded

Kyle Kuzma joined LeBron and Davis on the sidelines last Thursday after experiencing tightness in his calf and will probably miss a few games. The Los Angeles Lakers (32-20; 25-27 ATS) suffered a 110-104 defeat at Miami but managed to cover a 9.5-point spread despite all their injury problems.

Kentavious Caldwell-Pope led the way for the Lakers who battled bravely in the rematch of the 2020 NBA Finals, but they just couldn’t pull off an upset. Caldwell-Pope accounted for 28 points while making six of his 11 attempts from deep. Andre Drummond had 15 points and 12 rebounds, and Dennis Schroder also tallied a double-double with 10 points and 14 assists.

Saturday’s clash in Miami will be the Lakers’ fifth straight outing on the road. They are 2-2 straight up and 3-1 ATS in the previous four, tallying a couple of wins at Sacramento 115-94 and Toronto 110-101 along with that loss at Miami and a 104-86 defeat at the Clippers. The Lakers are the No. 5 seed in the West, trailing 1.5 games behind the fourth-seeded Denver.

The Nets look to extend their win streak to three games

The Brooklyn Nets (36-16; 25-27 ATS) dismantled the New Orleans Pelicans 139-111 on Kevin Durant’s return from a 23-game absence this past Wednesday. KD played 19 minutes off the bench and finished with 17 points, seven rebounds, and five assists along with perfect shooting from the field and at the line.

Seven Brooklyn players scored in double figures including LaMarcus Aldridge who had 22 points on 8-for-12 shooting from the field. Kyrie Irving led the way by notching 24 points and six assists, while Blake Griffin added 10 points, a couple of dimes, and a block.

The Nets have won six of their last seven contests including the previous two and are 2-5 ATS in that stretch. Brooklyn is topping the Eastern Conference at the moment, but the Philadelphia 76ers are only half a game behind the Nets.

The Nets are 4-1 straight up and ATS in their last five meetings with the Lakers. These two foes already met on February 18, and the Nets beat the Lakers as 3-point road dogs, 109-98. Brooklyn missed Kevin Durant, while LA was without Anthony Davis and LeBron James had 32 points on 14-for-23 from the field.

Despite that massive spread, I have to take the Nets to cover. Buying a few points might help if you’re satisfied with slightly lower wages, but I hope the Nets will be keen to smash the injury-depleted Lakers.

The under is 9-3 in the Lakers’ last 12 games overall, and it is 7-3 in the Nets’ previous ten outings at any location. Also, the under is 5-1 in the last six encounters between the Nets and Lakers, and it is 12-2 in their previous 14 meetings on the east coast.

I’m following the betting trends even though the Nets own the best offensive record in the NBA (118.5 points per 100 possessions). The Lakers have to bring their best defense, and the reigning champs own the best defensive rating in the league (105.9). None of the Lakers’ last eight games produced more than 214 points in total.