ATS » NBA » Los Angeles Lakers Odds: Could it Actually Be Time To Fade Them? 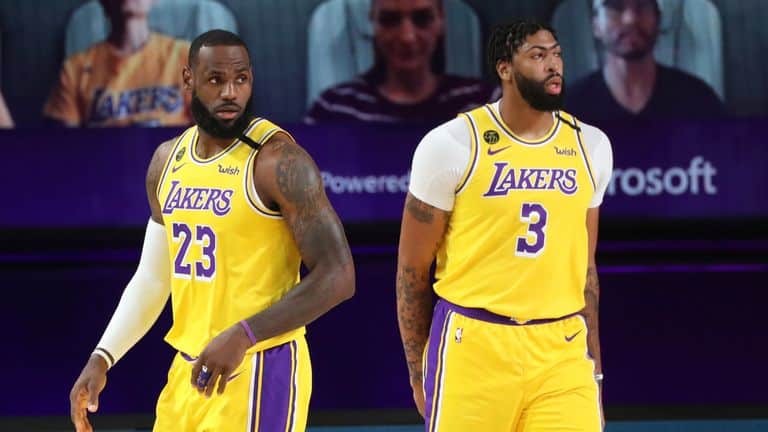 The Los Angeles Lakers have been one of the favorites to win the NBA Finals this season for pretty much the whole year (including the offseason). While there were some growing pains during the regular season, they still looked like the team to beat in the Western Conference and for the Finals.

But is that still the case?  Could it be time to fade the Lakers (just like the Bucks)?

As far as the Western Conference is concerned, the race is expected to come down to the Clippers or Lakers. It has been that way throughout the season and remains so.

The odds have always been close between the two at every sportsbook. Who has the shorter odds may vary, but the clear expectation is that it will come down them in the end.

But depending where you look, oddsmakers do not seem as keen on the Lakers winning the Finals anymore. They still have or are tied for the shortest odds at BetRivers (+250), FoxBet (+250), and WilliamHill (+260).

Oddsmakers make the odds what they are for a reason. That doesn’t necessarily mean the Lakers are in trouble. It could just mean that sportsbooks are trying to entice fans to bet more on them. But with how they performed during the seeding games, is that a good idea?

In the eight seeding games, the Lakers went 3-5. On the defensive end of the court, they ranked 12th among 22 teams with a rating of 111.2. Offensively, they were one of the worst coming in 21st in points per game with just 106.4.

Their lackluster performance could be explained, to a degree. Once the Lakers locked up the No. 1 seed, there was no reason to bring their ‘A’ game every night. Heck, since there will be no such thing as a home-court advantage in the playoffs this year, they didn’t need that.

It was more important to have their starters rested and healthy for when the playoffs start. Theoretically, since No. 8 seeds rarely provide a challenge, let alone win the opening round series, they could afford to wait until then to get their ‘A’ team on the court and in-sync.

However, with how the Portland Trail Blazers have been playing, there is a slight chance we could see an epic upset in the first round.

So—how should you bet? Is it time to fade the Lakers?

If anything, it is time to take advantage of PointsBet.com offering +325 to win the Finals. Have they looked good in the Bubble? No, but who cares? With LeBron James and Anthony Davis on the floor, the Laker will breeze past the Orlando Magic in the first round. Houston or Oklahoma City will make for an entertaining second round, but the Lakers should still win in seven.

Now, the Western Conference Finals will be a tough one against the Clippers. If they can make it past them, the Lakers will be favored against either the Bucks or Raptors coming out of the East. But if you wait until then to put money down, the odds will be a lot shorter than +325.