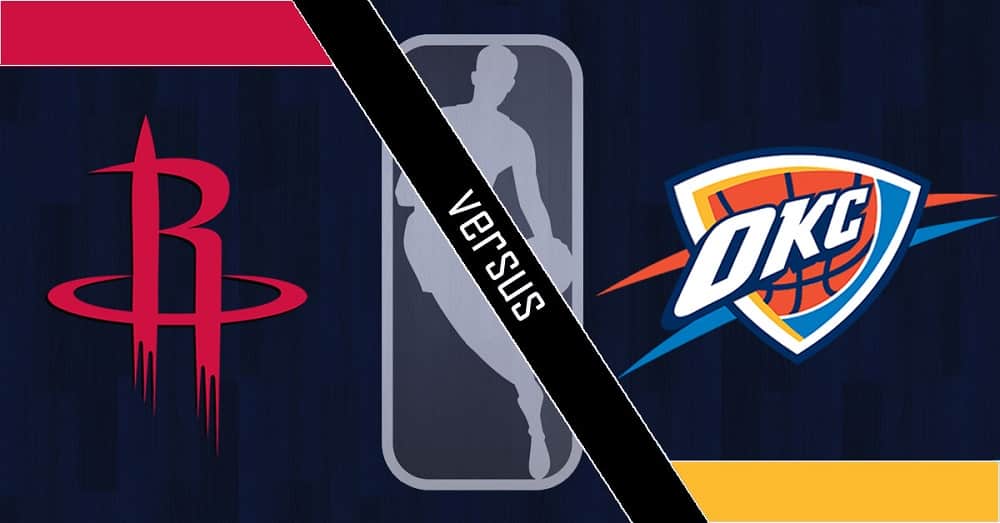 The Houston Rockets square off against the Oklahoma City Thunder on Monday night to open a two-game series at Chesapeake Energy Arena in Oklahoma City, so I’m taking a closer look to find the best betting pick for this Western Conference clash.

The Rockets opened as 4.5-point favorites on William Hill Sportsbook. They will miss David Nwaba (8.6 PPG, 3.1 RPG) due to an ankle injury, while OKC is without George Hill (11.8 PPG, 3.1 APG) who’s sidelined with a thumb sprain.

The Houston Rockets (9-9; 8-10 ATS) are rolling on a five-game win streak following a 126-112 victory at the New Orleans Pelicans last Saturday. They went 20-for-46 from downtown and scored a whopping 48 second-quarter points to outlast the struggling Pelicans, while Chris Wood led the way with 27 points and nine rebounds.

Wood is playing very well for the Rockets, averaging 23.6 points and 10.7 boards in his first season in Houston. John Wall is tallying 17.8 points and 5.8 assists per game, while Victor Oladipo is adding 22.0 points and 5.0 rebounds a night.

The Oklahoma City Thunder (8-10; 10-8 ATS) started a five-game homestand last Friday, suffering a heavy 147-125 loss to the Brooklyn Nets as 7-point underdogs. They were terrible defensively, allowing the Nets to make 57.0% of their field goals and 42.2% of their 3-pointers while scoring a whopping 70 points in the paint.

Shai Gilgeous-Alexander leads the way for the Thunder with 21.9 points, 5.4 rebounds, and 6.4 dimes per contest. However, the team’s second-best scorer, Luguentz Dort, is averaging only 12.7 points a night.

I like the energy within the Rockets since the James Harden trade. They work hard on the defensive end, and I expect to see another strong performance against the struggling Thunder team. OKC has dropped six of its last nine games overall while scoring 102 or fewer points five times in the process.

The Rockets still need to improve offensively. They’ll have some ups and downs, for sure, but OKC’s defense hasn’t looked good recently, so I’m backing the Rockets to extend their winning run and cover along the way.

Both Houston and OKC play at a fast pace, but I don’t expect to see a bunch of points. The Rockets lean on their defense, while neither side executes well on the offensive end. Of course, you never know when someone’s going to have a terrific shooting night, but these two teams defend the 3-point line at a high level.

That will be very important, as OKC takes 39.1 attempts from deep per game (4th), while Houston takes 38.5 (6th). The under has hit in the last three meetings between the Rockets and Thunder, and all three games produced 206 or fewer points in total. Also, the under is 13-6 in their previous 19 head-to-head duels, and it is 11-4 in the Rockets’ previous 15 outings.