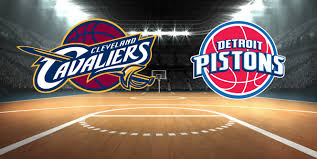 The Cleveland Cavaliers (10-27) look to snap their five-game losing streak when they challenge the Detroit Pistons (14-24) at Little Caesars Arena. The game starts at 7 p.m. ET on Thursday, January 9, 2020, and will air on Fox Sports – Detroit.

Detroit opened as a 7-point favorite, while the game’s Over/Under (O/U) has been set at 221 points.

The Pistons have emerged victorious in both matchups against the Cavaliers this year, escaping with a close 115-113 victory the last time these teams met. Detroit was unable to cover as a 3.5-point favorite and the game finished with a total of 228 points, which was 9.5 points above the projected point total of 218.5 points. The Pistons’ turnover percentage was their biggest strength over the Cavaliers. Detroit had a rate of 8.2, while Cleveland posted a mark of 14.8. Drummond recorded a double-double with 23 points and 20 rebounds.

Cleveland comes into the contest with records of 10-27 straight up (SU) and 15-20-2 against the spread (ATS). Games including the Cavaliers have a slight tendency to finish over the total (51.4 percent).

Half-court execution will be of utmost importance when two of the league’s slowest-paced teams battle. Detroit currently ranks 23rd in possessions per game (101.1) and Cleveland is 22nd (101.3).

When reaching the century mark, the Cavaliers are 9-17 and the Pistons are 13-17.

Over its last five outings, Cleveland is 1-4 ATS with 4 overs and 1 under.

Detroit is 2-3 ATS with 3 overs and 2 unders over its last five games.

The Cavaliers’ average margin of defeat in their last five games has been 11.0, up from 9.0 for the season.