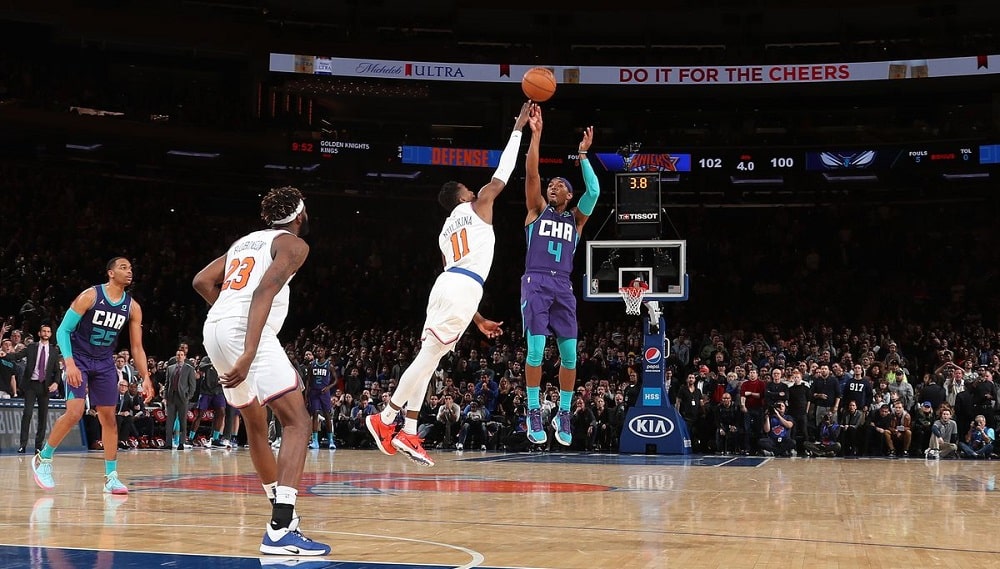 The Charlotte Hornets visit Madison Square Garden on Tuesday night to take on the New York Knicks, so here’s the best betting pick for their Eastern Conference showdown, as these two foes meet for the second time in 2021.

Back in January, the Hornets thrashed off the Knicks as 5-point home favorites, 109-88, recording their fifth straight victory over New York.  This time, the Hornets are quite shorthanded and open as 5.5-point underdogs with a total of 211.5 points on DraftKings Sportsbook.

The Hornets beat Portland to snap a four-game skid

The Charlotte Hornets (28-28; 30-25-1 ATS) put an end to their four-game losing streak this past Sunday, outlasting the Portland Trail Blazers as 4.5-point home underdogs, 109-101. Terry Rozier went bonkers and posted a line of 34 points, ten assists, and eight rebounds, while P.J. Washington added 23 points, eight boards, and four blocks off the bench.

With Ball and Hayward on the sidelines, Rozier is driving the Hornets’ offense, averaging 20.8 points and 5.3 assists per game over his last nine outings. Miles Bridges has been terrific lately, recording 19.3 points and 6.6 rebounds per contest in his previous ten appearances.

The Knicks hope to get revenge and extend their winning streak

The New York Knicks (31-27; 36-21-1 ATS) are rolling on a six-game winning streak following a 122-112 overtime victory to the New Orleans Pelicans this past Sunday. They’ve covered the spread for the ninth straight outing, as the Knicks were listed as slight home dogs against the Pels.

Julius Randle continues to lead the way for the Knicks. He dropped 33 points on New Orleans to go with 10 assists, five boards, and five steals. Over his last ten showings, Randle has been tallying 26.8 points, 9.1 rebounds, and 7.4 dimes per contest.

The Knicks, as I’ve mentioned above, hold the No. 6 seed in the Eastern Conference and are only half a game behind the fourth-seeded Atlanta Hawks. They score 109.7 points per 100 possessions (22nd in the NBA) and yield 108.0 in a return (3rd).

The Knicks have been terrific all season long, playing above all expectations. They’ll eventually have some bad games, but the Knicks are playing at a high level at the moment, so I’m backing them to stay on the winning path against the injury-depleted Hornets.

Also, the Knicks will have a huge motive to beat Charlotte for the first time since 2018. Julius Randle has been unstoppable thus far and will be a massive threat to the Hornets’ defense. On the other side, the Knicks’ D is one of the best in basketball this term.

The Knicks lead the NBA in opponent field goal percentage (44.1%) and opponent 3-point percentage (33.4%). They love to take things slowly, averaging only 96.2 possessions per 48 minutes, so I’m going with the under on the totals.

The Knicks’ pace is the slowest in the NBA, while the Hornets average 98.8 possessions per 48 minutes (17th in the league). The under has hit in four of the last five encounters between these two foes.