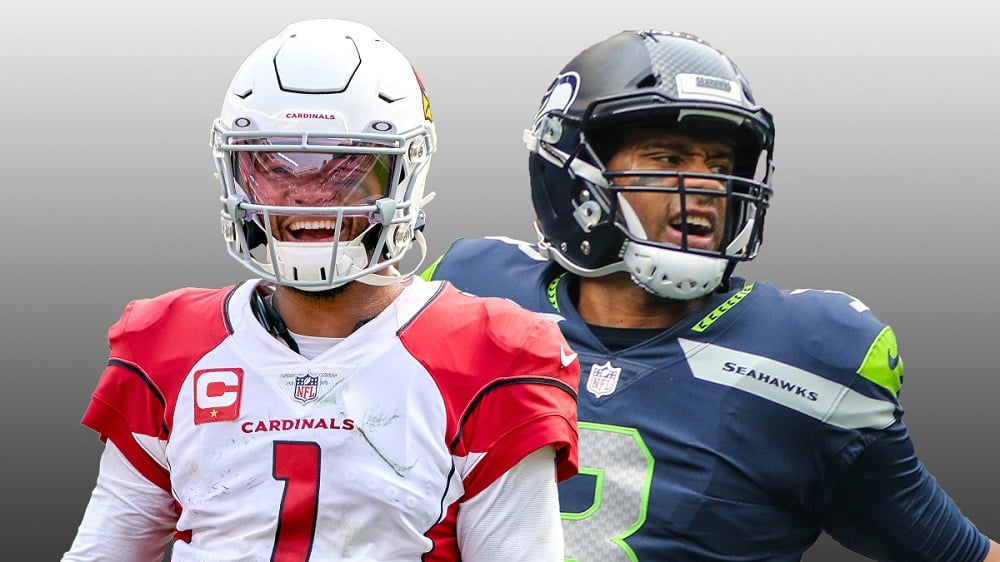 2021 NFL MVP Odds: Focus Only on the Quarterbacks

We don’t need to list every player at BetMGM Sportsbook to win the AP NFL MVP, but we will. Only because they’re there.

To whittle down the field even more, the non-QB winners since 1986 have all been running backs. A wide receiver has NEVER won the NFL MVP. A kicker even won it once. Shout-out to trivia answer Mark Moseley back in 1982 with the Washington Redskins.

There are a lot of guys on the NFL MVP odds board that have zero shot at winning it. None. Nada. Zip. Zilch. That means our focus will be on the guys that can, but for the sake of argument, we’ll list them all for you.

Credit to BetMGM Sportsbook for listing lots of players to give bettors options, but the list could have been the 32 NFL starting quarterbacks, the first-round draft picks that could start, and then a handful of top running backs. Throw everybody else in the ‘Field’.

Some guys are better considerations for NFL Offensive Rookie of the Year on this list, so maybe you’ll find some betting value and/or opportunities there.

The last eight winners of the NFL MVP are Aaron Rodgers, Lamar Jackson, Patrick Mahomes, Tom Brady, Matt Ryan, Cam Newton, Rodgers, and Peyton Manning. This is not an award where somebody wins as a huge surprise. It took a 2,000-yard season from Adrian Peterson to win the award in 2012, otherwise we’d be on a run of 14 straight quarterbacks. Peterson narrowly won that year as well.

In other words, don’t bet on anybody other than a quarterback. Is it possible? Sure. Also, it’s not really a smart bet. Three running backs have won since 2001. It’s a quarterback award. Wide receivers don’t get any love because the quarterbacks are throwing to them and if a WR has a big year, the QB gets the love and attention.

Let’s look at the top contenders at the QB position and see where they stand:

A deserving favorite. Mahomes has a bevy of weapons and puts up big numbers year in and year out. You probably can’t go wrong with taking him, even as the favorite, as he will win a lot of games and have the stats to win the award.

The Aaron Rodgers soap opera makes it hard to do anything with his betting odds at present. It seems likely he starts with the Packers, but who knows if that will be the case. He is the reigning MVP and has won three of them, but there is a lot of uncertainty here.

This is an interesting one, as Josh Allen took a huge leap last season. He has the weapons, especially with Stefon Diggs healthy and what will presumably be a better running game this season. The knock on his accuracy has gone away. He was in the top five in Comp% and passing touchdowns. Cut down a couple of interceptions and maybe he’s right there this season. He’s also in a weaker division than some of the other favorites.

Lamar Jackson is a dynamic player, but his passing skills really regressed last season and teams seem to have adjusted a little bit to playing the Ravens and their run-heavy scheme. The AFC North is a better division now and there are players that are likely to put up much more impressive numbers, even if he’ll make up some ground on the ground with his running numbers.

Too many interceptions and not a good enough team for Kyler Murray. Murray also only had 26 TD passes last season. He, like Jackson, can be a dual-threat guy, but unless Kyler is ready to take a huge leap, he’s a hard bet to make at this price. The MVP usually comes from a team that has double-digit wins and usually one that has one of the best records in the league.

You never want to count Tom Brady out in the MVP race, especially with how he finished the season last year. He still has tons of weapons in Tampa and eventually got to 40 touchdown passes. Father Time is usually undefeated, but not when it comes to the 43-year-old Super Bowl LV winner.

He did show some signs of age and didn’t play overly well against the Saints or the Packers in the NFC Playoffs, but figured it out and played great in the Super Bowl.

For the first time in his career, Matthew Stafford will not be playing for the Detroit Lions. Stafford is now with the Los Angeles Rams. It will be fascinating to see how he fits in with Sean McVay’s scheme and to see how he gels with his new team. If nothing else, he’ll have a better offensive line and more weapons. Stafford isn’t accurate enough and has thrown too many picks, but a clean slate might be what he needs.

It’s hard to take Dak Prescott off of the major injury. You can find better bets in this range…

Like Russell Wilson. Russ didn’t really get enough love for throwing 40 touchdown passes with very little help again. He was sacked 47 times. Only Carson Wentz and Deshaun Watson were sacked more. The Seahawks made the playoffs because of Russ. He’s a better bet than Prescott and most of the prices lower than him.

Justin Herbert is interesting at +3000 after a really good rookie season. The problem here is that the Chargers may not be good enough for him to get the necessary votes.

Ryan Tannehill is +3000, but if the Tennessee Titans get where they are supposed to go, Derrick Henry will have a lot to do with it. Henry is the only non-QB I would even consider to win the award.

Carson Wentz is +4000 with his new team, the Indianapolis Colts. He’s been reunited with Frank Reich and will have a dramatically better offensive line, but Wentz just makes too many careless decisions with the football.

Baker Mayfield is also +4000. The problem here with Mayfield is that the Browns run the ball as much as they do. He still throws those backbreaking interceptions, but he has weapons and feels comfortable with Kevin Stefanski and Alex Van Pelt. He just won’t get the chances to put up the numbers.

Take your pick of the top quarterbacks on the board because one of them is highly likely to win the AP NFL MVP.