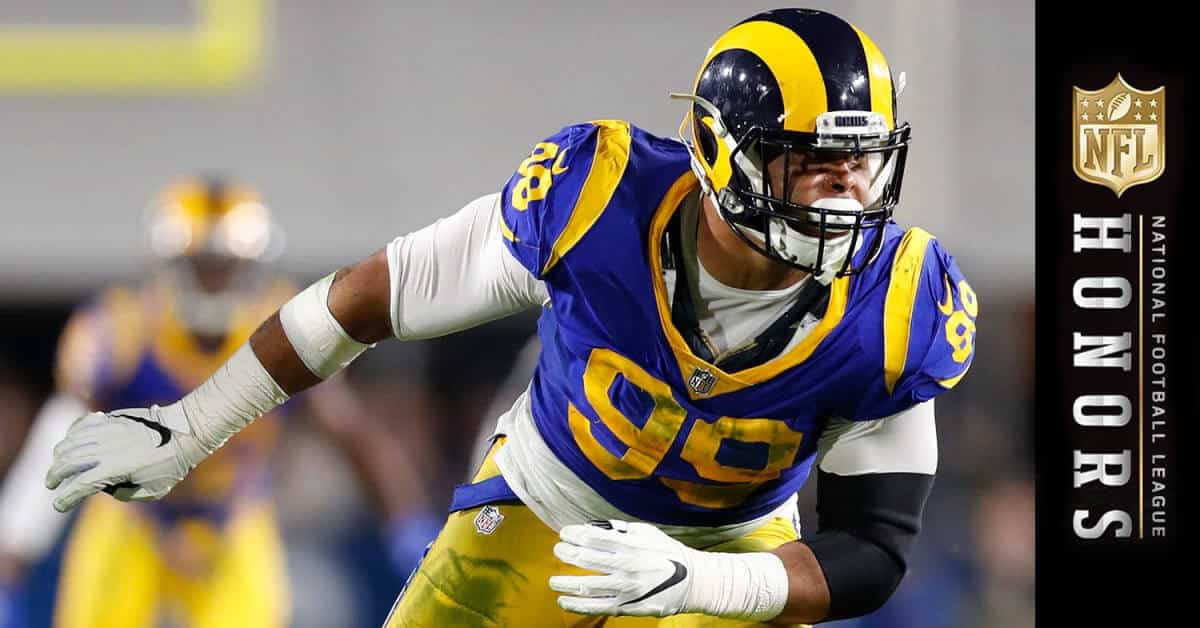 Parity is not a word used to describe the NFL Defensive Player of the Year Award. It is handed out annually by the Associated Press to, well, the best defensive player of the year.

Since 2012, there have only been five winners of the award. Credit belongs to Luke Kuechly, Khalil Mack, and Stefon Gilmore because they are the only players to separate JJ Watt and Aaron Donald from their respective reigns of terror. Donald joined Watt and Lawrence Taylor as the only three-time winners of the award last year.

That brings us to the betting odds for this year’s NFL Defensive Player of the Year:

THE PRESEASON DEFENSIVE PLAYER OF THE YEAR ODDS

This will shock you, but Aaron Donald was the favorite at +400. You do have a Watt in the top-three on the betting board, but not JJ. It is actually his brother, TJ, who was lined just below Myles Garrett. Nick Bosa, also a contender for Comeback Player of the Year, was just above his brother, Joey.

Another Ohio State product, Chase Young, was right below those guys. Right after Khalil Mack, we get our first defensive backs in Derwin James and Minkah Fitzpatrick.

There are tons of players listed for this award. For the most part, you have to be an absolute superstar to put up the numbers and also get the attention and notoriety required to win. What guys like Donald and Watt did in each of their seasons on the stat sheet stood out in such a way that there was really no other argument. Many believe that Donald is the best defensive tackle to ever play the game.

Sure, you can take a look down the board at some of the bigger prices and take your chances. There are some burgeoning superstars out there, like Tre’Davious White and Devin White in the +3300 range. There are even some really good, impactful players at 50/1 or higher.

Click on ‘Open’ to sort through the opening odds prior to the season and see where the players that you like to win the award are listed. As always, shop around for the best odds. There is no sense in taking +3000 when you could have +4000 somewhere else. It might even be a big enough difference to be worth signing up at a new sportsbook to get a Deposit Bonus and also better odds.

This is an award that can be won by a player at just about any position. Just because Watt and Donald are both defensive linemen does not mean that linebackers and defensive backs cannot win. It just means that the winners have been heavily skewed because of how many wins those two have racked up. From 2001-2011, there were five linebackers, two defensive ends, one cornerback, and three safeties.

The game has obviously changed over the last 10 years and rushing the passer seems to be the single most important attribute of a defensive player, but with so much emphasis on passing games, tight ends, and 13 personnel, safeties are extremely valuable in today’s NFL.

The disrupters on the line can and will get the headlines and the highlights, but the guys in the back seven can have a huge impact on games as well, particularly with interceptions, pass breakups, and the occasional touchdown return.

One thing to keep in mind about the Defensive Player of the Year is that being on a good team helps, but it is not the same kind of deciding factor as what we’d see for the NFL MVP or Offensive Player of the Year. That means you can dig a little bit deeper for players that will put up numbers. You won’t see the DPOTY from a last-place team or a third-place team with a 5-12 record, but you can have an average team with a great player and still win the award.