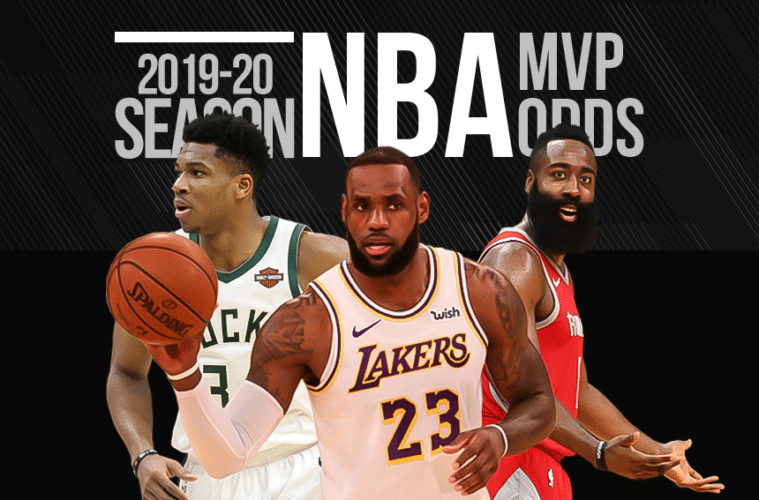 With the 2019-2020 NBA season just three short weeks away, it’s time to start looking ahead to favorites for all major awards. First we’ll start with the biggest of them all, the league’s Most Valuable Player (MVP).

Jump Down To The NBA MVP ODDS

Behind Antetokounmpo’s heroics, the Bucks finished with a league-best 60-22 record. The last time the Bucks were the best regular season team in the league? Just 45 years ago when they casually rostered two hall of famers, Oscar Robertson and the man with more points than anyone else in history, Kareem Abdul-Jabbar.

Giannis’ effort last season certainly put him into elite territory, and don’t forget that the man is just 24 years old! Now entering his 7th professional NBA season, Giannis is no longer a skinny project in the works. Antetokounmpo has steadily increased all three major statistical averages (points/rebounds/assists) during nearly all six previous years, but does he have any more room to grow?

Arguably Giannis’ biggest weakness is his 3-point shooting. He shot a disparaging 25.6% from downtown last season, shooting just 52-203. By comparison, Giannis was actually more accurate during the 2017-2018 season when he shot 30.7% from three on 43-140 shooting. That’s not to say that he isn’t one of the league’s best players, but it is clear that he does have an exploitable weakness (as Toronto showed during this year’s Championship run).

For the last two seasons, the title of “best player in the league” has been up for grabs. LeBron James has held the throne for quite some time, but he’ll be 35 next year and his window of glory seems to be coming to an end. Kevin Durant was arguably #2, but his status is now in limbo following an Achilles’ rupture during the playoffs. It is extremely unlikely he returns at more than 80% of his former self due to the severity of an Achilles’ rupture, but we can’t rule him out of the top 5 just yet.

Following James and Durant, you then have (in no specific order) Stephen Curry, Kawhi Leonard (also coming off an injury), James Harden, Anthony Davis, and of course Giannis. Slightly below the top tier of players, you then have the likes of Russell Westbrook, Joel Embiid, Kyrie Irving, Nikola Jokic, Damian Lillard, and even Paul George. Your 2020 NBA MVP will undoubtedly be one of these 13 elite players.

A few you can definitely rule out early include Kevin Durant (recovering from injury), Paul George (multiple offseason surgeries), Russell Westbrook (sharing the spotlight with Harden), and Kyrie Irving (weak supporting cast). Following them, Kawhi Leonard is also very unlikely to claim an MVP (recovering from injury and sharing the ball with PG13), as is Nikola Jokic (undermotivated), and finally James Harden (the media seems to hate him and he now has Westbrook).

This means that the 2020 MVP is extremely likely to be one of the following: James, Davis, Curry, Antetokounmpo, Lillard, or Embiid.

The 2020 NBA MVP race will likely be a close one between Curry and Giannis, but Giannis has one major thing working against him; he won last year. Winning consecutive MVP trophies has been near impossible during the last few years. Arguably James Harden should’ve won MVP in 2017, 2018, and 2019, but he has just one MVP trophy to his name. The last player to win consecutive MVPs? None other than Stephen Curry himself, doing so in 2015 and 2016.

Most importantly, Curry’s MVP seasons came without Kevin Durant. Guess what’s new about Golden State this year? No Kevin Durant. Klay Thompson is also recovering from an ACL tear, so there’s never been a greener light for Chef Curry than the 2019-2020 season (as if he’s ever seen anything but a green light the last few years).

The addition of D’Angelo Russell may limit his shots just a bit, but expect the 2019-2020 Warriors to be a lot of Stephen Curry and Draymond Green. Don’t be surprised if Curry gets close to making 400 3-pointers again next season en route to a 60-win season, which will give the league’s greatest shooter his third and well-deserved MVP trophy.

Freddie Kitchens In Danger Of Being Fired By The Browns Already?