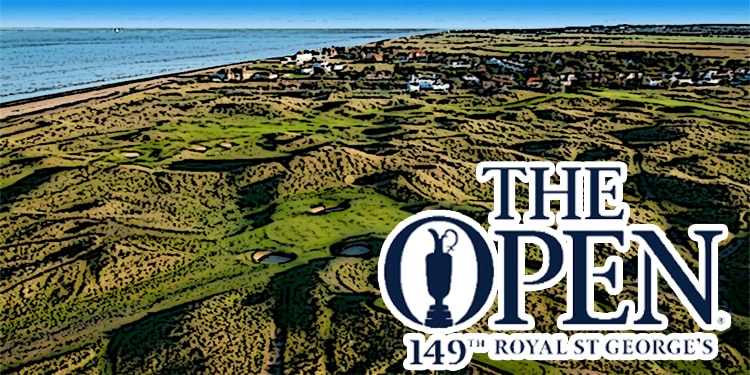 If it’s better to be lucky than good, what will it mean at Royal St. George’s Golf Club to be both?

That is the host venue for The Open Championship. Many call it the British Open, but there is no mistaking that this is the premier crossover event for the PGA Tour and the European Tour. It is also the fourth and final major of the 2020-21 PGA Tour season.

There are a lot of handicapping elements to talk about in the quest for the Claret Jug this year. We’ll get to all of them in a second, but not after we mention that Unibet Sportsbook offers a No Deposit Free Bet to try out the site, along with a Risk-Free Bet when you decide to make a deposit.

It seems only fitting that we highlight a European sportsbook that came across the pond to join the legal U.S. betting landscape with this week’s excellent field and what should be an outstanding display of golf in Sandwich, Kent, England.

Jon Rahm won the U.S. Open and he’ll look for a major on European soil here as the favorite of The Open Championship. Rahm is +750 to win and -110 to finish in the top 10 at Unibet. Brooks Koepka and Xander Schauffele are the co-second favorites at +1600. We all know what Koepka has done in majors, but Schauffele is still looking to get over the hump. He’s been a lot like Tony Finau, who, by the way, is +4000.

As is always the case with a major, the odds board is loaded with short prices on elite players and big tournament winners. That means that you can often find outstanding players at great prices in the next tier, like Tyrrell Hatton and Collin Morikawa at +3300, reigning champ Shane Lowry at +4500, and PGA Champ Phil Mickelson at +10000.

Unibet has a great format for the odds, showing top-five, top-10, and top-20 prices across the board, so you can see those all in a very organized format.

Royal St. George’s has hosted The Open Championship 15 times. The most recent was 2011 when Darren Clarke was a surprise winner at 5-under. Ben Curtis won in 2003 at 1-under. This is a par 70 coming in at 7,200 yards. With the weather conditions and the other course elements, don’t expect to see a lot of low scores.

This golf course is wide open, so there is nothing to block the wind. Players are going to need some lucky bounces this week as well. Along with the wind blowing shots off-track, this course is very bumpy and hilly. It is a true links golf course. As a result, balls are going to spin weird in the fairways and even on some of the greens.

Iron play is always essential, but players this week will have to contend with shots on upslopes and downslopes. We’ll see a lot of shots for players with weird footwork or some irons that don’t come pure off the face. Luck will be a factor this week to be sure.

Sand play is always important in these kinds of tournaments as well. Naturally it would be best to avoid the sand, but that isn’t always an option in links golf.

We don’t really have much to go on here. The facelift of golf in recent years has given us a lot of players at short prices that have only recently joined the PGA Tour. Guys like Mickelson, DJ, Rickie Fowler, Martin Kaymer, Sergio Garcia, and some others were prominently featured on the leaderboard. DJ was tied for second with Mickelson, three shots back of the winner Clarke. Fowler was fifth.

The better move is to consider how players have done on similar links-style courses. Places like Harbour Town or Pebble Beach. Places like St Andrews, Carnoustie, or Kingsbarns for the Alfred Dunhill Links Championship, an event won twice by Tyrrell Hatton. Hatton was also runner-up in 2018. Branden Grace won it in 2012. Rory is a two-time runner-up.

That would be the preferred method for course form. Guys like Brian Harman and Harris English live down in Sea Island, Georgia, so they likely play Harbour Town in Hilton Head and Sea Island a lot. Those are the angles you’d probably want to consider more than anything.

Last week’s Scottish Open had an excellent field and all kinds of drama when Lee outlasted Matthew Fitzpatrick and Thomas Detry to win. Ian Poulter and Lucas Herbert had solid top-five finishes. Ryan Palmer was also in that T-4th group. Rahm was seventh. Scottie Scheffler was a solid 12th.

Guys that are swinging it well are certainly important, but this course is nothing like what the players have seen recently, with the exception of the Renaissance Club last week.

Dustin Johnson at +2200 is not a price that we see often. His creativity and feel for the game is unparalleled and a course where you really need to manipulate the golf ball seems right up his alley. If nothing else, he’s +450 for a top-five finish.

Tyrrell Hatton at +3300 is also worth a look. This is a course format he has to be comfortable with and he’s been a top-10 finisher in four of the last five Open Championships.

Shop around for the best prices. Unibet has a great sign-up bonus, but you may find better odds on certain players at DraftKings, FanDuel, or another sportsbook, so don’t be afraid to look for better than 50/1 on Webb Simpson or better than 55/1 on Harris English.

Remember that the British Open has that big time difference here in the States, so coverage will be overnight or in the early morning hours for the most part.