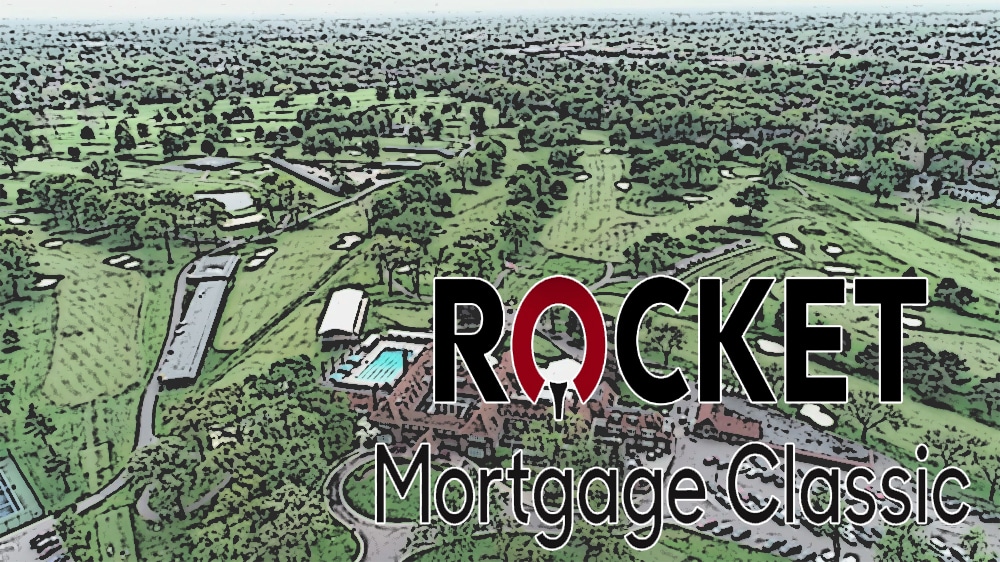 As a general rule, something has to be around a long time to be referred to as a “Classic”. That doesn’t seem to be the case with golf tournaments and is definitely not the case with this week’s Rocket Mortgage Classic at Detroit Golf Club.

This will be just the third year of this event up in Motown and also just the second year under somewhat normal conditions. Last year’s version was the fourth event after the PGA Tour returned. This year’s version is on the July 4 Weekend once again, but things around the country look a lot different and fans will be in attendance this time around.

The other option, completely unrelated to golf, is the Bet $5, Win $150 promotion for the remainder of the NBA Playoffs that you can use as a sign-up offer. We encourage you to take advantage of one of them and sign up at FanDuel Sportsbook today!

The fine folks at FanDuel have installed reigning champion Bryson DeChambeau as the +700 favorite. “Captain America” Patrick Reed might be a wise choice in the spirit of the weekend with double the price of DeChambeau at +1400. Hideki Matsuyama and Webb Simpson are both +1600 and the only other players under +2000.

This field lacks the depth of a lot of fields, but there are guys on the board that have won recently or have had sustained success on the PGA Tour, like Garrick Higgo, Gary Woodland, Phil Mickelson, Rickie Fower, Max Homa, and Danny Willett.

This event will be a birdie fest. The winning scores over the two years have been 25-under and 23-under. The cut was 5-under last year and that was with a mostly rusty set of players coming out of the COVID shutdown.

Detroit Golf Club is a Donald Ross design that looks to be playing a bit longer this year at around 7,330 yards, but it is the flattest course on the PGA Tour and only one hole includes a water hazard. Eleven of 18 holes played under par last year for the scoring average and the ones that did not were not far over par.

The rough is very forgiving here and this basically becomes a putting tournament. Put it close, make your birdie, move on to the next hole. Detroit did experience some flooding due to heavy rains last week, so maybe tournament officials will have the luxury of some longer rough and thicker fairways to prevent some roll, but it will be warm and sultry all week to dry everything out.

Well, we don’t have a lot of course form data this week because we only have two previous events. Sepp Straka has the two best finishes here of any player to play twice with an eighth and an 11th. He’s got a big price at +6500 this week.

That is a wide range of players. DeChambeau and Wolff are bombers. Redman and Armour are two accurate iron players. Kisner is an outstanding putter. Reed, Niemann, and Hatton are good all-around players.

Redman was the runner-up two years ago to Lashley and finished a solid 21st last year. Stuard is a local guy from Michigan. He has a big number at +15000. He was fifth in 2019 and 30th last year.

Recent winners in this week’s field include Jason Kokrak, Phil Mickelson, Garrick Higgo, Kyoung-hoon Lee, and, if we go down to the Korn Ferry Tour, Mito Pereira, who has won two events in a row in the KFT. Kokrak is second this season in SG: Putting and this course has a heavy putting bias, so that might be something you want to look into this week.

There are a lot of different ways to go this week, but Jason Kokrak at +2700 does make the cut for me. He’s played really well this season as a whole and this does become a putting tournament and he’s been terrific on the greens. He’s also played really well tee-to-green and ranks 17th in SG: Total. He’s been off since the U.S. Open and the rest probably did him some good.

This looks like a good fit for Cameron Tringale at +4100. He’s 25th in SG: Putting and 44th in SG: Approach. He not good off the tee, but that isn’t a big deal at this event. Tringale has the right skill set for this course.

Don’t be afraid to take some big prices this week either. Brice Garnett ranks 10th in SG: Putting and he’s +12000. Troy Merritt has played well here and is +10000. Find some big bomb prices because one could very well win it. Just ask Nate Lashley, who is +15000.