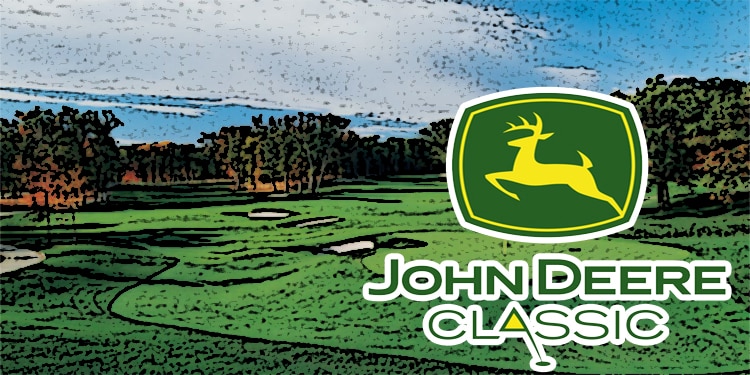 Personally, I’m not a big appetizer guy. I know friends that swear by them and will order them all the time. I don’t love the mark-up knowing that they will be shared, but this actually isn’t a post about food. It is simply to draw a parallel between a meal and the PGA Tour schedule.

This week is one of those appetizers that you don’t really love, but consume because it is sitting there while you wait for the main event. The Open Championship at Royal St. George’s is next weekend in England. This week’s appetizer is the John Deere Classic at TPC Deere Run.

Each golf tournament is unique and features betting opportunities, so we still have a lot of reasons to look at and handicap this one, but if you are a casual golf fan or aren’t willing to do the research on guys that are not household names, it will be a tough one for you.

We’ll use the odds from FanDuel Sportsbook, where you can get a Risk-Free Bet up to $1,000 if you sign up now, to see if we can find a few plays and hopefully some fun sweats for the weekend.

Daniel Berger is the clear-cut favorite at +950 per the odds team at FanDuel Sportsbook. Brian Harman is the second favorite at +1500, leading a group that features Sungjae Im, Russell Henley, and Kevin Streelman as the only players below +2800 at time of publish. Si Woo Kim and last week’s winner, Cameron Davis, are those at +2800.

When analysts say that this is a weak field, they are not kidding. Several good PGA Tour players are in the Scottish Open and others are heading across the pond to get accustomed to the time change or fulfill any COVID-19 protocols in advance of The Open Championship next week.

This is a birdie-making course. This is also an event that usually becomes about the putter because so many players are racking up GIRs. There are some risk-reward holes and some elevation changes to this course in Silvis, Illinois, but hazards are limited, the bunkers are easy to play out of, and we’re getting these kinds of scores without elite fields.

There are only three par 5s with the par 71 and about 7,270 yards of length, but the course seems to play quite a bit shorter than that, as evidenced by the success of guys like Zach Johnson, Steve Stricker, Jordan Spieth, and several other guys not known for length off of the tee.

Charles Howell III has also played really well here with eight top-25 finishes and three in the top 10. Howell was a guy that had a long run of top-20 finishes up until recently and might not be a bad look here at +8000.

Ryan Moore won here in 2016 and has two other top-10 finishes to go with six top-25 results. Brian Harman has been 26th or better in every start at TPC Deere Run. Lucas Glover has four top-25 finishes. Vaughn Taylor has five of those and a couple of top 10s.

We’ve covered course form. Now what about recent form? Hank Lebioda is an interesting name with back-to-back top-five finishes and a price of +4300. That is a way shorter price than we usually see, so his recent form is very much priced into the number.

Brian Harman has four top-20 finishes over his last five events and deserves his short number as the second favorite. Cameron Davis won last week, with Troy Merritt and Alex Noren both in the top five. Those three guys all have short prices.

While some of the finishes haven’t quite shown it, Jhonattan Vegas does have a couple of top-10 finishes lately and has been one of the best recent ball strikers. He’s +3600 here, but you can find better prices out there in the market.

Beau Hossler at +7000 loves putting on bentgrass greens and his putter is the best club in his bag. Hossler has three straight top-25 finishes and this is the right type of course for him with a heavy dependence on the flatstick and not as much emphasis on distance off of the tee. He’s a good bet this week.

Hossler is -108 in a head-to-head matchup with Luke List this week. That also looks like a good bet.

Charles Howell at +8000 is a great look as well. While his recent form has tailed off, he’s played well here and been consistently solid for the most part during this PGA Tour season. Howell was sixth here two years ago. There was no tournament last year because of COVID.

If you really want a monumental long shot, Kris Ventura is +47000. Ventura doesn’t do much well except putt, but for $5, you could do a lot worse than hoping he makes the weekend for a sweat.

Jhonny Vegas is -102 in a matchup with Maverick McNealy and that looks like a solid wager as well, along with Brian Harman +106 against Daniel Berger. Berger isn’t here to win the tournament, he’s here to work on some things and wouldn’t mind leaving early for England.

GET YOUR WELCOME BONUS TO BET GOLF AT FANDUEL SPORTSBOOK