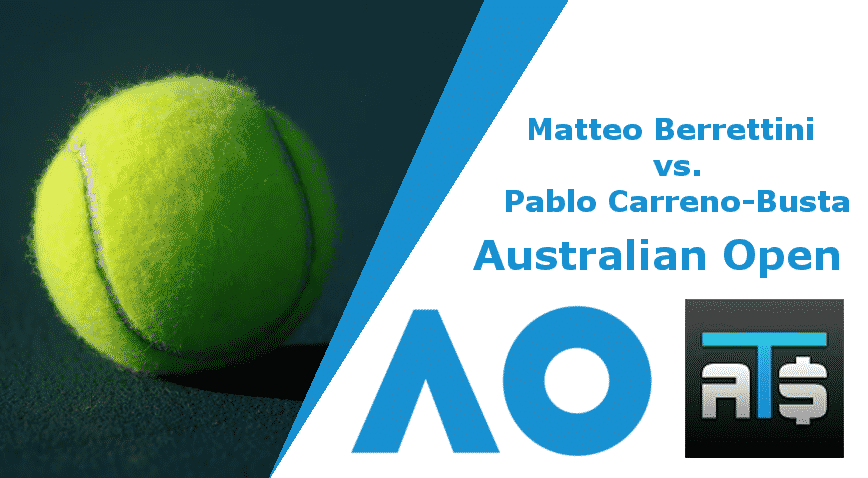 For the second straight match at the 2022 Australian Open, Matteo Berrettini is tasked with taking on a tough opponent from Spain. This time, it is Pablo Carreno-Busta who will look to get through the Italian number one, with a trip to the quarterfinals on the line for both men. In our tennis predictions for Saturday night in Melbourne, we look at Carreno-Busta vs Berrettini in what is expected to be another exciting match involving Berrettini.

New players at BetMGM can take advantage of the site’s new player promo when betting on Carreno-Busta vs Berrettini. The site is offering a risk-free bet worth up to $1,000, giving bettors peace of mind when making their first wager on BetMGM. If a player’s first bet wins, they will keep their profits and use them as they see fit, or be reimbursed up to $1,000 for the amount they wagered if their bet loses.

Why Bet On Carreno-Busta:

✅ Matteo Berrettini was unable to separate himself from Carlos Alcaraz in their match last time out, needing a fifth-set 10-point tiebreak to secure the victory. Berrettini has plenty of talent, but isn’t the most reliable physically, as we saw with his roller coaster-like levels of performance against the young Spaniard. Against Carreno-Busta, another demanding match beckons, and Berrettini shouldn’t run away with this one either.

✅ The backhand of Berrettini was way better than usual against Alcaraz, which propelled the Italian to victory. Now, after a grueling five-set match, a regression from the Berrettini backhand should be expected. His slice’s net clearance will not be as consistent as it was against Alcaraz, and Carreno-Busta will benefit from it.

✅ Neither player has made an Australian Open quarterfinal in their career. This is Berrettini’s first match contested in the round of 16 after having to bow out last year due to injury. Carreno-Busta, meanwhile, has fallen twice at this stage, but has stayed within four service games in both of those losses.

The recipe for Carreno-Busta is clear, as he needs to keep the ball on Berrettini’s backhand side. That wasn’t enough for Carlos Alcaraz to beat the Italian in the third round, but it did help Alcaraz dig out of a two-set hole to force a fifth set and a super tiebreak. Carreno-Busta’s rock-solid demeanor combined with a clearly defined strategy for this match could be enough to see him through here.

Matteo Berrettini snuffed out the flame of the most hyped young star of the Australian Open, beating Carlos Alcaraz in five thrilling sets to move into the round of 16. Berrettini won the first two sets, dropped the next two, and held on to win in the fifth set via the 10-point tiebreak to end the match. Now, Berrettini will have to overcome the physicality of that last match, along with his opponent on the other side of the court.

For Berrettini, the question in this match is whether or not his backhand will be as solid as it was for long stretches against Alcaraz. The Berrettini backhand will always be his weaker wing, given how devastating his forehand is. But the Italian kept himself in points with both traditional and slice backhands throughout the match, and he will need to avoid regression on that front to keep his hopes of winning his first major alive in Melbourne.