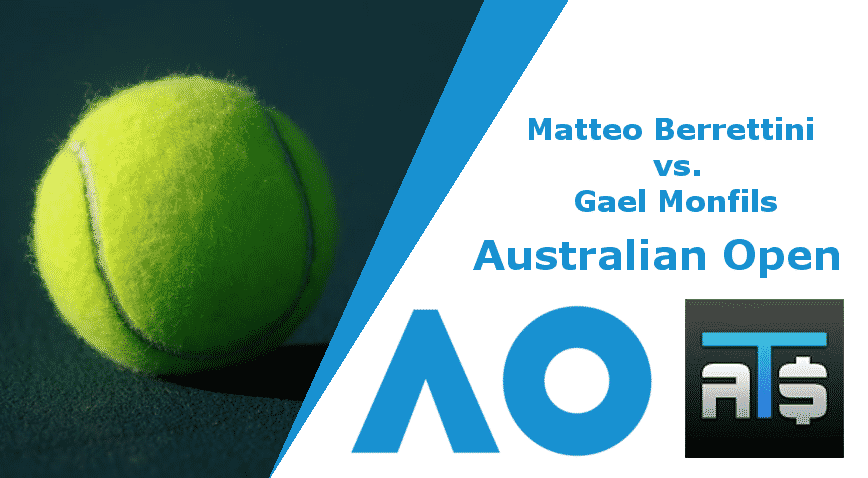 Gael Monfils and Matteo Berrettini have torn up the field at the 2022 Australian Open so far, playing some impressive tennis en route to the quarterfinals. Here, they fight for the right to play in the semifinals, with a possible date against Rafael Nadal looming. In this round of tennis predictions from the Australian Open, we look at Monfils vs Berrettini and decide which big hitter will get to the semis in Melbourne.

New players at BetMGM can take advantage of a new player promo from the site, good for a risk-free bet worth up to $1,000. Bettors can take advantage of this offer by placing their first bet at BetMGM on this Monfils vs Berrettini match. If that bet loses, bettors are refunded the amount that they put on the match, up to that $1,000 amount.

Why Bet On Berrettini:

✅ These two players had a five-set classic at the US Open in 2019, with Berrettini winning in a fifth set tiebreak. Berrettini has improved dramatically since then, though, and should have an easier time against Monfils than he did in their first major encounter. Since then, the Italian has won their only other encounter in straight sets at last year’s ATP Cup.

✅ Gael Monfils was showing some ill effects of the demands of Grand Slam tennis during the end of his match with Miomir Kecmanovic over the weekend. He was clutching at his knee throughout the third set, and looked exhausted for the second half of the match. Berrettini is more built to last at this stage of the careers of these two men, which will be a difference maker.

✅ The way to beat Berrettini is to attack his backhand constantly, which requires a ton of discipline. Gael Monfils is more of a showman than a tactician, and he will be too tempted to end points on his terms than to wait Berrettini out for errors. That will be great news for Berrettini, who has had to hit backhand after backhand against Alcaraz and Carreno-Busta.

Gael Monfils has had a nice resurgence to start the 2022 season, including four wins in four matches at the Australian Open. He has beaten Federico Coria, Sascha Bublik, Cristian Garin and Miomir Kecmanovic all in straight sets in Melbourne, putting on a show in the process. But things are about to get more difficult on Monfils, who is going to get his first taste of a difficult match at this year’s first major.

So far this campaign, Monfils has faced two clay courters in Coria and Garin, a player who doesn’t appear to care enough to be great in Bublik, and a player in Kecmanovic who would have lost in round one if not for Novak Djokovic’s deportation. Berrettini will be the first real contender that Monfils has faced at this tournament, and he will need to be sharp to avoid bowing out.

Matteo Berrettini has dropped four sets at this year’s Australian Open, but has faced a much tougher list of opponents than Monfils. In his last two matches, the Italian number one dispatched a tough pair of Spaniards in Carlos Alcaraz and Pablo Carreno-Busta. Even with both of those opponents trying to pepper the backhand of Berrettini, Berrettini was able to keep himself afloat with his weaker wing to set up his destructive forehand.

In this match, Berrettini should see more forehand hitting chances than he did in his last two matches against the Spaniards. But he also will see more power from Monfils’ side of the court than he did his previous opponents. As long as Berrettini can absorb that pace, he should be able to outlast Monfils here.