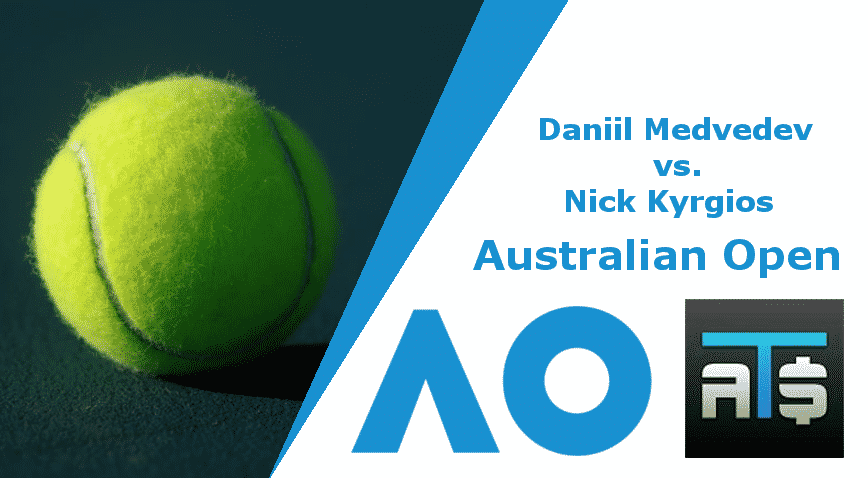 While it is a shame that Daniil Medvedev and Nick Kyrgios are meeting so early in the Australian Open, their second round match on Day 4 of the tournament is set to be appointment viewing in every sense of the word. The top remaining seed in the tournament taking on the consummate showman on home soil will create an entertaining affair no matter how it goes. In this edition of our tennis predictions from the Australian Open, we break the Medvedev vs Kyrgios match down and determine if the hometown anti-hero can create some magic.

New players at BetMGM can get involved with this Medvedev vs Kyrgios matchup with a risk-free bet worth up to $1,000. There, bettors who place their first wager on this match can be reimbursed in the amount they risked with their first bet if that bet loses, up to $1,000. Of course, if the bet wins, they can simply keep any profits generated from that bet and continue wagering as they please.

Why Bet On Kyrgios:

✅ Kyrgios has won both of his previous meetings with Medvedev, though one of those matches was on clay where neither player wants to be. In their lone hardcourt meeting in Washington, Kyrgios won two tiebreak sets, and there should be plenty of chances for tiebreaks in this clash as well.

✅ While Nick Kyrgios is understandably thought of as a player who quits whenever things are not going his way, that is not the case at the Australian Open. Kyrgios has lost just two career main draw matches in straight sets at this event. Those straight set losses came against Milos Raonic in 2019 and Andy Murray in 2015. He will, if nothing else, compete in this match.

✅ We have seen Kyrgios step up in these night matches at the Australian Open in the past, like he did last year in a close loss to Dominic Thiem. The Australian’s serve is the great equalizer, and we could very well see several tiebreaks if he can get his first serve in play, which will shrink the service games margin even if Medvedev wins in straight sets.

Daniil Medvedev took care of business in his first match at the Australian Open, beating Henri Laaksonen in three sets. Medvedev became the top seed left in the draw before the tournament even started, when Novak Djokovic was ousted from the event due to his vaccination status. He showed no nerves in that position in match number one, but will have to deal with the crowd on top of his place as the top player in the tournament in this match.

Tactically, this match is all about getting the Kyrgios serve back in play by any means necessary, as Medvedev is always going to be superior to the Australian from the ground. That is easier said than done, though, especially in front of an audience that will be pro-Kyrgios from the moment the players take the court. Medvedev has struggled with being cheered against in the past, and it will be interesting to see what impact it has on him here, if any.

Nick Kyrgios looked good in his return to tennis after nearly four months off, beating Liam Broady in straight sets in the first round. Kyrgios looked happy to be back on court, constantly prompting the crowd to get behind him and feeding off of their support when they did. In this match, Kyrgios will need all of the help he can get from the crowd at Rod Laver Arena as he faces a big challenge against the number two player in the world.

For Kyrgios to stay in the fight against Medvedev, his first serve percentage will need to be superb to avoid being dragged into too many groundstroke rallies. If the Kyrgios first serve can get him easy points, and he can manipulate the crowd into getting into Medvedev’s head, we could be in for one of the matches of the tournament here.