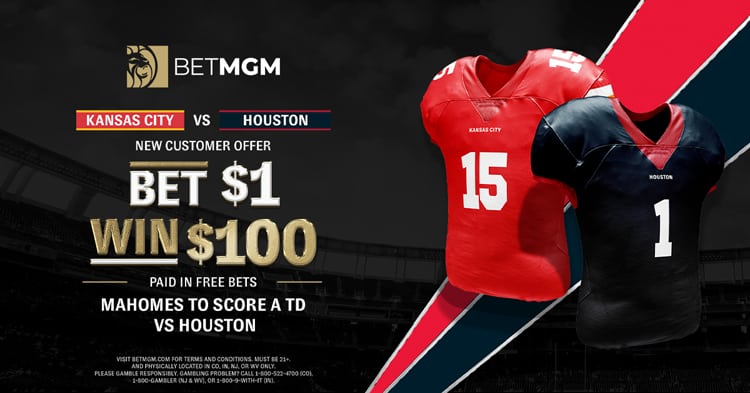 You can get a really great return on your $1 investment. All it takes is a Patrick Mahomes touchdown, bet $1 and get $100 back. Signup now and also get a $500 Risk Free Bet, and $20 Free In Play Bet

Big things are happening at BetMGM Sportsbook with the start of the football season. For starters, BetMGM has been named the first official sports betting partner of the Detroit Lions and we’ve certainly seen a lot more of these partnerships rolling in as the leagues that were once so vehemently opposed to sports betting have adopted the “If you can’t beat ‘em, join ‘em” philosophy.

But, more importantly for you, we’ve got another Bet $1, Get $100 promotion this week from BetMGM and this one is a doozy. For those that are in New Jersey, Indiana, Colorado, or West Virginia, you are eligible for this promotion.

The Houston Texans and the Kansas City Chiefs meet up on Thursday night in the NFL Kickoff Game in a battle of two very wealthy quarterbacks. While you won’t make millions of dollars like Deshaun Watson and Patrick Mahomes, you can get a really great return on your $1 investment. All it takes is a Patrick Mahomes touchdown.

No, it doesn’t have to be a rushing touchdown. It could be a passing touchdown. Heck, it could be a receiving touchdown. All that has to happen is that Patrick Mahomes needs to be part of a touchdown against the Houston Texans. You may remember them as a team that allowed 45 offensive touchdowns last season.

You may also remember Mahomes as the guy that accounted for 50 passing touchdowns just two years ago. Last season, he battled an injury, but still managed 28 touchdowns in the regular season and 10 more in the postseason.

So that’s your bet. Four quarters to win 400 quarters on Patrick Mahomes to be part of a touchdown against the Houston Texans.

Boy, that sure seems easy, doesn’t it?

Well, let’s hope so because those that have a BetMGM account in New Jersey, Indiana, Colorado, or West Virginia will happily take their $100, which is paid in free bets.

If you don’t have an account, now would clearly be a pretty good time to get one. Sign up through us here at ATS and get up to $500 in free bets upon your initial deposit. 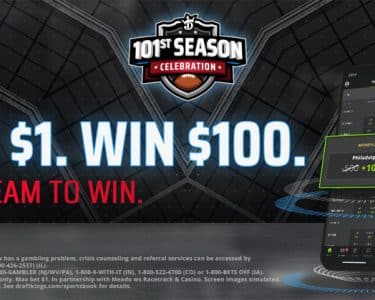 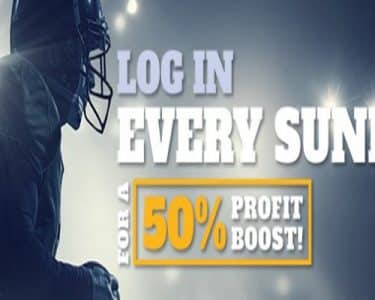 BetRivers Illinois Sportsbook Promo Has A Lot to… 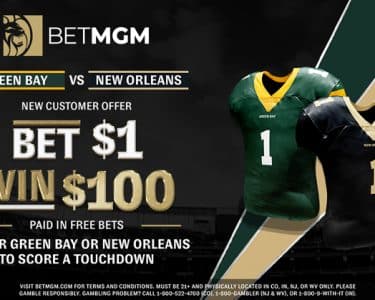