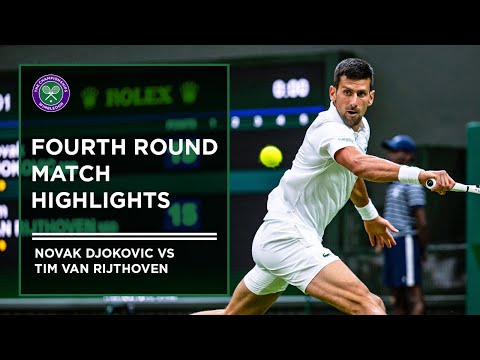 After defeating Tim van Rijthoven, Novak Djokovic will continue to pursue his seventh Wimbledon title in a quarter-final against Jannik Sinner.

Read the full Djokovic vs Sinner expert pick on this game.

Djokovic will compete in a Wimbledon quarter-final for the 13th time. He has now won 25 consecutive tour-level matches on grass, the third-longest streak in the Open era. These successive victories at Wimbledon mean he is at the same level as Pete Sampras in fourth place on the Open era’s list of the longest unbeaten runs at SW19.

So far, Djokovic has lost to a player at a lower rank than Rijthoven at Grand Slam only once. It was five years ago when he lost to the 117th-ranked Denis Istomin at the 2017 Australian Open.

Djokovic now has won 331 Slam matches. However, he made 19 unforced errors when he took a little over an hour to win the final two sets.

Djokovic’s next opponent, Sinner, demonstrated an impressive performance against the fifth seed Alcaraz on Sunday. His serves and returns scored him victory to reach the quarter-finals for the first time.

His big server gave him a solid foundation, and some strong returns from both flanks kept him in control against Alcaraz, who played tenaciously and saved two match points before turning around the third-set tie-break.

Sinner briefly lost confidence at the start of the fourth set. He then managed to compose himself, saving three break points from 0-40 to move 4-1 up. Alcaraz remained firm to save three more match points before Sinner eventually found a way to end the match.

“He’s maturing a lot on the big stage. I think he doesn’t feel too much pressure on the big stage,” Djokovic said of Sinner. “He’s very solid. He has every shot in his game: serve, return, forehand, backhand. He’s constantly putting pressure on opponents.”

After missing three break points in the first set, Rijthoven played steadily into his first outing as he followed up a couple of devastating forehand winners with a smash to throw off Djokovic.

A double fault on his first set point almost cost him the win, but Djokovic chased down a shot on his second of four break points to end the set. Rijthoven managed to deliver successive aces, levelling the competition at the third opportunity.

However, that was as far as Rijthoven could go. A double break allowed Djokovic to take the lead in the third set by 5-0 before he clichéd his fourth set point to regain control.

“I knew coming into the match that it was always going to be a tough challenging matchup against Tim, who I’ve never faced before,” he said after the match. “I watched him play. He’s got a really good game for grass, which he proved today. [It] was a very good fight, especially in the first two sets.”