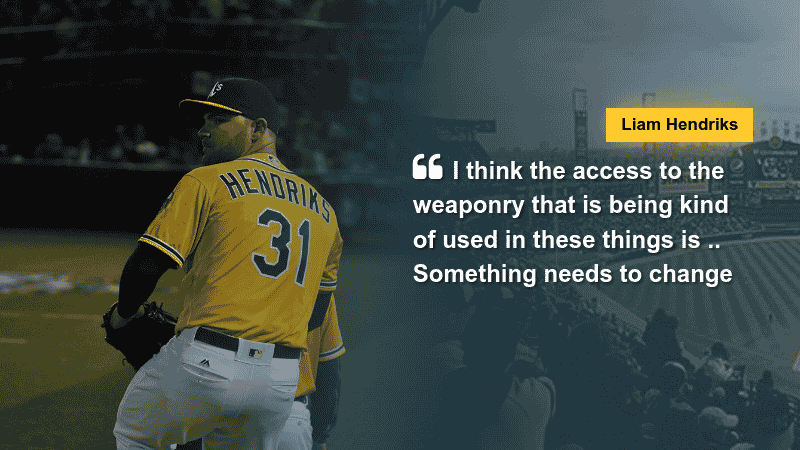 Following the July 4th tragedy in Highland Park, Chicago White Sox pitcher Liam Hendriks has been vocal on a number of political issues and advocated for increased gun control in a pre-game interview with the media.

The Australian-native stated that there is a need for change because the incident has occurred on multiple occasions.

According to the pitcher, there is an urgent need to re-evaluate, as all prevention and mitigation efforts have been woefully inadequate.

“We really need to reflect on what is going on. I don’t think enough is being done. I think there’s two sides and the two sides need to meet somewhere in the middle and figure this out because too many people are dying and it’s no excuse to be like ‘I’m on this side or this side.’ That’s no excuse.” he argued

To avoid further tragedies, both pros and cons must act to reach a compromise and work together to solve gun control issues.

“At some point, things need to get done or else it’s getting to the point where civilization as you know it may be ending just due to the fact there’s two drastically different sides.” Hendriks continued.

The White Sox activated Hendriks from the 15-day injured list today. In 2022, he has been having a productive season, recording 16 saves and a 2.81 ERA in 25 2/3 innings of work. Aside from his performance on the pitch, Hendriks is not afraid to express his beliefs.

He was seen standing in front of a T-shirt that said “Stars & Stripes & Reproductive Rights” in his stall. He previously expressed his thoughts on the Supreme Court’s decision to overturn Roe v. Wade, allowing states to prohibit abortions. On 670 The Score on Friday, the White Sox pitcher expressed his disappointment, saying it was a bad day for women’s rights. He too has advocated for LGBTQ rights.

Hendriks, who was born and raised in Perth, described American gun culture as “baffling” after growing up in a country where firearms are much more legally restricted.

The Chicago White Sox cancelled their planned postgame fireworks show on Monday, following the deaths of six people and serious injuries to more than two dozen others during a Fourth of July parade in Highland Park.

The game against the Minnesota Twins still continued at 7:10 p.m. CT, but there was a brief pause before the first pitch. The organization also issued a statement expressing condolences to the victims’ families.

According to reports, on Monday morning, a lone shooting spree at Highland Park’s Independence Day parade. In an area where many people had staked out seats, the shooting sparked immediate fear and confusion. As the manhunt continues, residents have been recommended to take shields. The suspect was supposedly arrested by police Monday evening after a relatively short hunt.

Following the school shootings in Uvalde, the Chicago Bears, Blackhawks, Bulls, Cubs, and White Sox formed a Chicago professional sports alliance and donated $300,000 to the Robb School Memorial Fund and the Sandy Hook Promise Foundation, with the assistance of the Robert R. McCormick Foundation.

Unlike the New York Yankees and Tampa Bay Rays, however, the teams did not include stricter gun control messages until Hendriks’ press statement.