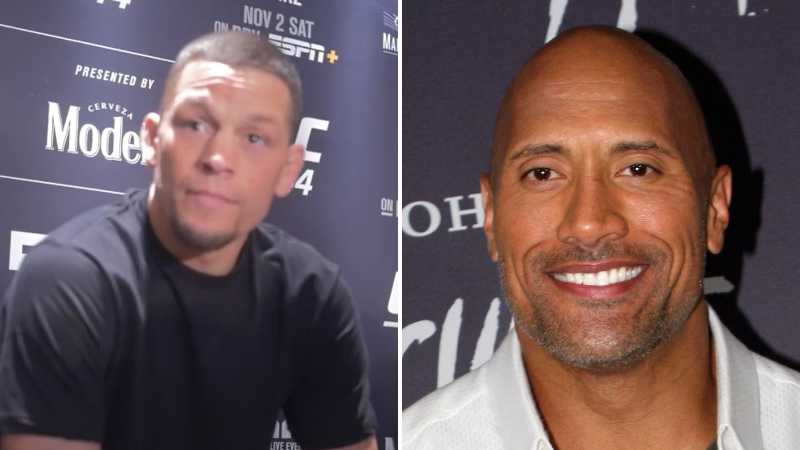 Nate Diaz, a UFC legend, claimed that he would ‘only fight’ Hollywood actor and former WWE Dwayne “The Rock” Johnson after leaving the organization following his victory over Tony Ferguson in Las Vegas.

The 37-year-old fighter posted to Twitter on Wednesday to express his desire to face The Rock. “I’m only going to fight the rock Otherwise I’m good,” Diaz tweeted.

Im only going to fight the rock
Otherwise I’m goood

The Stockton native, who had long waited for the UFC to organize a final fight for him, finished his UFC contract on September 10, when he faced Ferguson as a replacement for Khamzat Chimaev in the main event of UFC 279.

“I wanna get out [of] the UFC for a minute and show all these other fighters how to own up another sport. Then I’m gonna be right back here to get a motherf--g UFC title,” Diaz said in his post-fight interview.

After having won the Ultimate Fighter 5 competition in 2007, Diaz went on to fight for the UFC for over 15 years. He proved to be the best lightweight fighter throughout this period. In addition, he competed in the lightweight championship. He gained recognition after submitting Conor McGregor at UFC 196 in 2016. His UFC record is currently 22-13-0.

Dwayne Johnson announced a co-branded footwear collaboration between his Project Rock line and the UFC last month. The multi-year agreement, which was finalized in January 2022, requires UFC fighters to wear “The Rock’s” shoes during weigh-ins and when leaving the octagon, as well as Venum uniforms as part of an apparel agreement.

However, the fighters do not receive a cut of the revenue generated by the lucrative deal struck by the UFC and Johnson’s company, according to reports.

“Look at these shoes, they made me put this s–t on. F–k these shoes!” he told UFC correspondent Megan Olivi and showing his orange shoes in front of the camera.

It’s not the first time Diaz has spoken out about the Rock. When Johnson was on hand to present Jorge Masvidal with the symbolic BMF title at the UFC 244 post-fight press conference, he said, “F- The Rock too man, that motherf–– over here playing me,”

“See him over there smiling with Masvidal. Should have had Mike Tyson handing out a belt if anybody … I don’t give a f— about no belt anyway. But he can get it too.

Diaz’s contract with the UFC expired following this fight, and he has said that he will not return to the organization for the time being. Diaz’s team confirmed recently this week that he would release Real Fight Inc., his own combat sports promotion.

“All I know is it’s been a love-hate relationship with UFC for as long as I’ve been in this f—ing organization,” Diaz told UFC commentator Joe Rogan.

“At the end of the day, I love the UFC. Shout out to Dana White and [UFC Chief Business Officer] Hunter Campbell for giving us the platform. I feel like I’ve had the longest career in the UFC, and I’ve had the most successful one.”