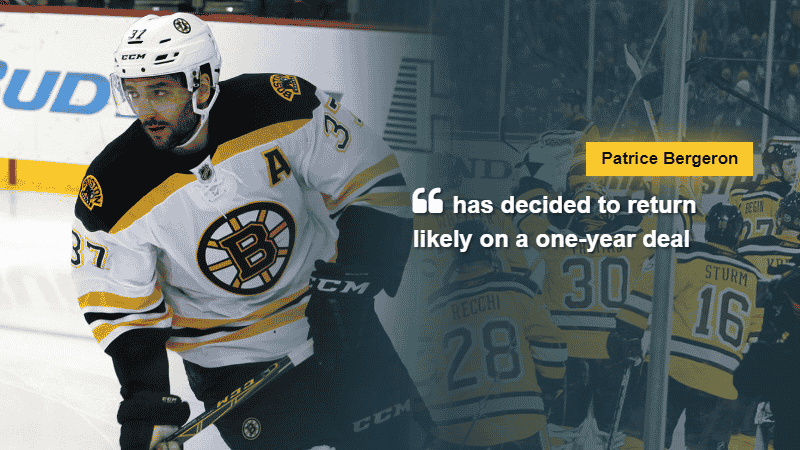 Patrice Bergeron to remain with Boston Bruins for another season

According to Joe McDonald of Worcester Telegram & Gazette, Boston Bruins captain Patrice Bergeron has decided to sign a new one-year contract with the team.

The 36-year-old Bergeron recently completed his 18th season in Boston. He just played the final year of his $55 million, eight-year contract, which began in the 2014-15 season.

Since he has been playing for a long time and injured multiple times throughout his career, it would not be surprising if Bergeron considered leaving. Fortunately, he decided to remain for one more season.

Bergeron is still widely considered one of the best hitters in the league. For nine consecutive years, he has been the No. 1 center for Boston. He won his fifth Frank J. Selke Trophy earlier this month after being named a finalist for the 11th season.

The trophy is awarded to the “forward who demonstrates the most skill in the defensive component of the game”.

That was an especially remarkable achievement for Bergeron, considering he had not won a Selke Trophy since 2017. His tally of 65 points — 25 goals and 40 assists — in this season is his highest output since 2018-19.

He was selected by the Bruins with the 45th overall pick in the 2003 NHL Draft. He has since played 1,383 career games.

The Bruins center recently completed his 18th season in Boston. He recorded 400 goals and 582 assists for 982 points in 1,126 career games. Bergeron also played a vital role as a member of the 2011 Stanley Cup-winning team.

Bruins general manager Don Sweeney made it clear that team was not ready to go on without Bergeron because of how valuable he is.

“We will give Patrice as much time as he needs. You could look at plans B and C, but you don’t replace that type of player and what he means to our organization,” he said.

Sweeney said he was not sure whether there would be another Bergeron.

The Bruins are not prepared to find a replacement for its captain. No center on the Boston roster or anywhere else in the organization’s reserves that would step in. For the past seven years, the Bruins have not had other well-developed center players.

With Bergeron remaining, the Bruins have another year to find his replacement.

The Bruins can now focus on revamping their lineup for another playoff campaign next season. Some of the things that they need to do are reorganizing the center, improving the team’s performance, and completing a long-term expansion with right winger David Pastrnak. The leading goalscorer said he was uncertain if he would remain in Boston past next year.

Additionally, forward Brad Marchand and defensemen Charlie McAvoy will not be playing for the first few months of the next season. The Bruins are also reportedly looking for a new head coach to replace Bruce Cassidy.

Bergeron told reporters last month that he could not imagine playing for another team, making the most viable options for him to be either retiring or staying with the Bruins.