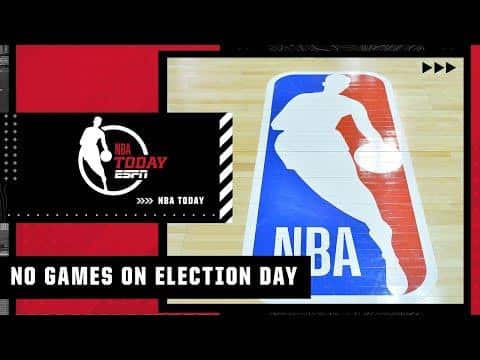 NBA decides not to hold games on Election Day, encourages fans to vote

The NBA will not schedule regular season games on this year’s election day on November 8 in order for fans to have more time to vote. The league spoke to The Associated Press that they encourage everyone, especially fans, to be cooperative during the election.

“The scheduling decision came out of the NBA family’s focus on promoting nonpartisan civic engagement and encouraging fans to make a plan to vote during midterm elections,” the league representative said.

Vote.org CEO Andrea Hailey supported the league in their motion to encourage not only athletes but also fans to vote.

“The NBA is creating a culture of political participation, which extends not only to its athletes but to fans as well,” Hailey said.

“Players, coaches, event staff and fans all deserve to have the time and space to make their voices heard at the ballot box. The league is setting an important precedent that I hope other businesses and leagues will follow.”

Many players, like LeBron James, were involved in voter registration and other initiatives that encourage voting. Some teams have been reported to turn their arenas into registration or voting centers.

All 435 seats in the House of Representatives are up for re-election in addition to 30 senate seats, several gubernatorial races, as well as key propositions in many states.

Due to the increase of vote restrictions in many states, all 30 NBA teams will play on November 7. Some of these restrictions include cutting voting time and forbidding people from eating or drinking while they are waiting to cast their vote.

Executive director of the NBA’s Social Justice Coalition James Cadogan acknowledged that the need to change the schedule for external events was a rarity.

“It’s unusual. We don’t usually change the schedule for an external event,” Cadogan said. “But voting and Election Day are obviously unique and incredibly important to our democracy.”

The league typically also has no games scheduled on Thanksgiving and Christmas Eve, while trying to avoid scheduling the games on the same day as the NCAA men’s basketball championship game. It also has a few days off around February, at the time of the All-Star game.

Other than NBA, some other leagues are also off due to their schedule. However, there are still NHL games and a few college football games that will be set on election day.

Shams Charania from The Athletic has said that the Boston Celtics are set to host the Philadelphia 76ers on the first day of the regular season. Other than the Celtics, the Golden State Warriors are also reported to have some activities on the opening day of the season.

Charania said the rematch of the recent NBA finals would be scheduled before the All-Star game. The first game will have the Warriors playing against the Celtics on December 10 at Chase Center. Another game between time will be set on January 19 at the TD Garden.

Charania reported that the Milwaukee Bucks are set to start activities on October 20, where they will be playing against the 76ers in Philadelphia. Meanwhile, the Miami Heat and the Celtics are also reported to be playing in the Eastern Conference Finals on October 21 at the American Airlines Arena, Florida.

The Atlanta Hawks is reported to host Miami on Martin Luther King Day, which is on January 16, while the Memphis Grizzlies will be the host to the Phoenix Suns.

Daniil Medvedev wants Novak Djokovic to play at US Open