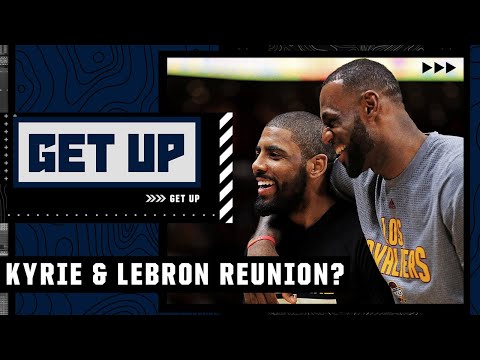 Despite the fact that no contract has been signed, the Lakers appear to be the overwhelming favorite among NBA teams to sign defunct Nets point guard Kyrie Irving this summer. According to NBA reporter Marc Stein, LeBron James is “rooting hard” for the Los Angeles Lakers to sign Kyrie Irving this offseason.

King James seems excited because no one knows Irving better than he does. They had a fantastic dynamic from 2014 to 2017 in Cleveland, including the 2016 NBA championship victory over the Golden State Warriors, in which Uncle Drew hit one of the greatest shots in Finals history. Many people believe that because Irving has lost contact with his former teammates, James is the only player knowledgeable enough to guide Irving’s exceptional talent into cohesive on-court accomplishments.

Russell Westbrook and Kyrie Irving are both considering one-year, multimillion-dollar deals that would bind them to teams for another season that do not appear to be their ideal homes. The Nets and Lakers are “actively engaged” in trade talks involving All-Star guards Kyrie Irving and Russell Westbrook, according to Yahoo Sports’ Chris Haynes.

In the same report, the teams have yet to agree on the remaining components of the potential trade, including draft picks. The Lakers are said to be interested in signing Joe Harris, a 30-year-old guard with two years and $38.6 million left on his contract. The Lakers are also interested in point guard Seth Curry, who is in the final year of his $8.5 million contract.

Irving is one of the NBA’s most gifted point guards, averaging 27.4 points and 5.8 assists per game while shooting 46.9 percent and connecting on 41.8 percent of his 3-point attempts. All of those numbers would be advantageous to the Lakers. With $36.5 million owed to him next season, Kyrie still has many years ahead of him. However, due to various injuries as well as other issues off the field, he has only appeared in 103 regular-season since 2019.

Los Angeles is eager to close the deal in order to maximize their championship chances, especially given James’ uncertain future with the Lakers. This offseason, The 37-year-old is eligible for a two-year, $97.1 million contract extension.

Veteran sports reporter Marc Stein said that LeBron is reportedly pushing for a trade involving Westbrook and Irving between the Lakers and the Nets “more than anyone.”

“James, I’m told, wants to see Irving in Lakerland more than anyone,” Stein wrote in his newsletter.

ESPN’s Adrian Wojnarowski reported that Brooklyn appears to be on the verge of trading their point guard to Los Angeles in order for Kyrie to reunite with LeBron before he opts into the final year of his contract with the Nets. After all, replacing Westbrook with Irving could be James’ final real chance in Los Angeles following the 2021-22 season’s disaster.

The lack of team victory the previous year may have also allowed both players to move on from the previous discord between the two superstars.

The Lakers won a championship in 2020, but were eliminated in the first round the following season and did not make the playoffs at all in 2021-22, finishing 33-49. Last season, Brooklyn finished seventh in the East before being pushed out in the first round by Irving, who had a stretch in March and April when he scored at least 40 points in four games, including 60 against the Orlando Magic on March 15.