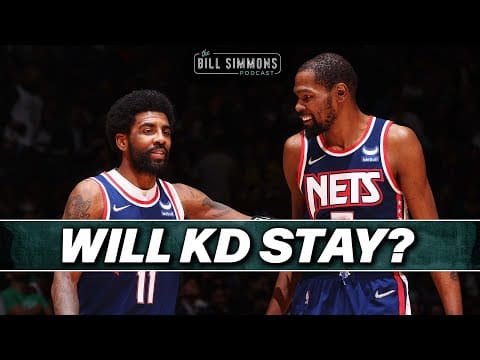 Kevin Durant Opens Up About Trade Request From Brooklyn Nets

Kevin Durant made his first statement on Saturday through a post on Twitter regarding his trade request from the Brooklyn Nets.

Throughout his career this season with the Nets, Durant has averaged 29.9 points, 7.4 rebounds, and 6.4 assists. However, he only played 55 games during the regular season as he was recovering from a medial collateral ligament (MCL) injury.

After making a trade request and choosing to remain silent for a while, Durant, who is the power forward of the Nets, uploaded a post on Twitter. Broadly speaking, he revealed his hard work so far in the team.

He explained that anyone who had played with him would know that he had worked hard. Durant wrote, “The guys locked in that gym with me know for sure, they know about me. If you haven’t been there with me, just ask.”

The ones who were locked in that gym with me know what it is, they know what I’m about. If u haven’t been in there with me, ask around

Until now, the factors that prompted the tweet were still unknown. When Durant was asked to clarify what the tweet was about by user @robinlundberg, he simply replied with, “Keep dreaming robin, lmao.”

Some of the questions that later emerged from the public include: what factors drove Durant’s request for the trade; where he wanted to go after leaving the Nets; and is there anyone who questions Durant’s hard work?

Rumors about Durant’s wish to go to the Miami Heat or Phoenix Suns also emerged, which led to another question about what will happen if the exchange process with the Heat or the Suns doesn’t work out.

Durant requests trade from the Nets

Earlier this week, news emerged that Durant requested a trade from the Nets. This news was quite shocking and put Durant into the limelight as the trade request came less than a year after he signed a contract extension with his team. Related to the news, the Heat and the Suns were mentioned as the teams that Durant wanted.

Based on several reports, Durant has a strong desire to play alongside the reliable players on these two teams. Even so, the trade request may not be granted by the Nets. Trades will reportedly be difficult to make if the Nets don’t get players of equal performance as Durant’s in return.

It's not good for the NBA's image (and ratings) that superstars can force trades even when they have 4 YEARS LEFT ON A CONTRACT, as Kevin Durant does. But this is now the way business is done in the NBA – and why the NFL is still so much more popular.

In addition, Durant still has four years remaining on his current contract with the Nets. This contract does not include a no-trade clause. That way, the Nets can send Durant to any team that Durant wants while being profitable for the Nets.

Moreover, when referring to Durant’s solid performance, almost every team in the league will openly accept Durant as a new member of the team. What’s more, Durant won the NBA MVP in 2017 and 2018 making him one of the players most teams wanted.

Through Twitter posts, several NBA players commented on Durant’s request for a trade. Here are some related comments:

Ja Morant as the point guard for the Memphis Grizzlies wrote, “Easy money.”

Meanwhile, Josh Hart, shooting guard for the Portland Trail Blazers said, “I love how we always got something going on in the league.”