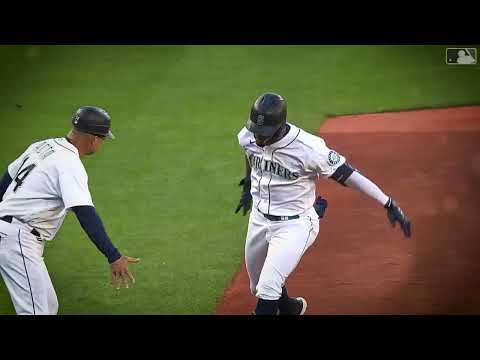 On Saturday afternoon, Seattle Mariners’ Julio Rodriguez was named June American League Rookie of the Month. It was his second accolade after previously winning the same award in May. The 21-year-old player debuted on April 8, 2022, for the Mariners.

With this achievement, Rodriguez is the first Mariners player to win back-to-back honors since Ichiro Suzuki did it twice 11 years ago. Suzuki won the Rookie of the Month in April-May and August-September in 2001.

With the numbers, he led the June American League rookies in almost every offensive category, including 30 hits and 22 runs made from 44 times on bases out of 58 total bases. From May to June stats, Rodriguez made some improvements from what he recorded in April, especially where he hit a .206/.284/.260 slash line with four doubles and only six RBIs.

Seattle Mariners manager Scott Servais was impressed and grateful that Rodriguez won the honor. He stated that the 21-year-old outfielder continues to demonstrate progress by making changes for the team.

“Yeah, that’s how I would sum it up: ‘Wow.’ We could describe it any number of ways, talking about how impressive it was, but just watching it every day… the adjustments he makes, the joy he continues to play with, I just hope that never goes away,” Servais explained.

“I said that the day we called him and I pray to God that it stays with him for a long, long time.”

Servais said he wondered about how Rodriguez’s play will sum up the Mariners’ performance, but he also stated that there are possibilities of him underperforming. In addition, he said that Rodriguez is on his time to show his performance for the team. Therefore, he expects Rodriguez to remain on track for a long time, says him.

“It really is the sign of how you put together great seasons when you can minimize that number,” he said. “There will be some of them because these guys are humans and not robots. Maybe they’re not feeling well, or the game is slipping away from us, or whatever.”

According to Servais, Rodriguez will continue to have a great season this year if he can continue his stats until the end of the year.

“But if you can put it that way, you’re looking at the end of the year and you’ve had a great season. Julio has one going right now.” he said