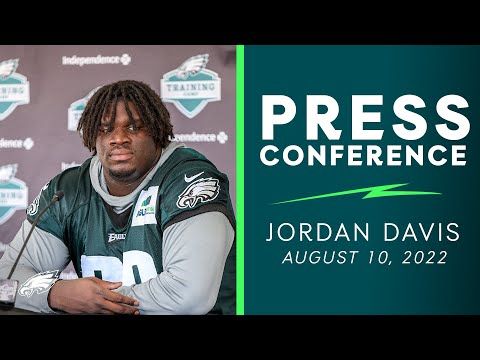 A video of Philadelphia Eagles DT Jordan Davis pushing a teammate in training camp has gone viral on the internet. In the video, Davis can be seen pushing fellow rookie Cam Jurgens backward during a drill.

The incident took place at NFL training camp on Sunday, and the video went viral on Wednesday. It invited criticism from fans.

Davis has since responded to the comments. He claimed that the video only showed a one-sided perspective.

“I hate it, honestly. I just feel it shows … very one-sided. You see one rep, but you don’t see Cam blocking me, getting me at practice, getting me in other reps. I always say looks can be deceiving,” Davis said.

Davis said he wished people on the internet stopped sharing the seven-second video. He said he saw Jurgens as a “good teammate”.

“I always say that looks can be deceiving. One rep and it goes viral, whatever, whoop-da-whoop, but Cam is holding his own. He’s a very good player and it’s just good competition. It’s iron-on-iron. You see the background of everything, but don’t let the hype get to you.” Davis said.

A fan reacted to the video, editing it backward and saying it was an “alternate” version, which shows Davis as the one being pushed by Jurgens. It was uploaded by Twitter user @5am_tweeter and received around 24K likes.

“I feel like I get more ready every single day,” Jurgens said after the joint training. “I’m excited. I’m just ready to play football and hit someone that’s not on our own team. I feel like every day we’re getting better.”

Jurgens was selected No. 51 overall by the Eagles in the 2022 NFL draft. He signed a four-year, $6.9 million with the team, which included a $2.2 million signing bonus. Previously, The 22-year-old center played for the Nebraska Cornhuskers in NCAA football. He was named starting center in 2019 and received All-Big Ten honors in 2021.

Davis was selected 13th overall this offseason in the 2022 NFL draft after. He was part of the Georgia Bulldogs squad that won the 2022 NCAA football. Davis signed a four-year, $17 million contract with the Eagles, which included a $9.55 million signing bonus.

He led the Bulldogs to win the final game against Alabama Crimson Tide on January 10 at Lucas Oil Stadium in Indiana. In the same season, He was awarded the Chuck Bednarik Award as the top defensive college footballer and the Outland Trophy as an interior lineman. Before claiming the Bulldogs’ first NCAA win since 1980, Davis recorded 32 tackles, two sacks, and one touchdown in the 2022 NCAA regular season.

Davis and Jurgens will play for the Eagles’ upcoming preseason games against New York Jets on August 13, according to sources.