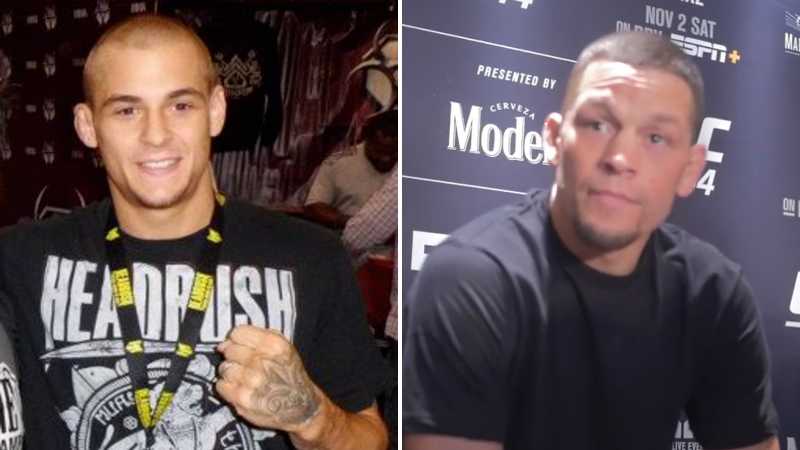 Dustin Poirier was almost paired with Nate Diaz for the UFC 279 main event due to Khamzat Chimaev’s massive weight gain for the welterweight contest. In response, Poirier revealed in an interview with Heavy.com that he had agreed to the fight.

While the fight between Poirier and Diaz never happened, it was previously reported that UFC president Dana White and the organization played several scenarios in which both fighters would face each other.

According to previous reports, the committee reshuffled the pre-existing card, resulting in the main event match between Diaz and Tony Ferguson.

In a statement made by Poirier during the show that was broadcast on YouTube, he explained that he agreed to travel to Las Vegas to face Diaz.

“It [phone call with UFC] was good. It was surprising,” Poirier said. “My coach Mike Brown just flew into Louisiana the night before, and it was his birthday. So, I ate some pasta, so I was a little bit heavy the morning they called. Then they offered me the fight and I accepted it. They had to go through hurdles with the athletic commission to try to make this thing happen, for me to fly over same day.”

Knowing the difficulties in getting to Vegas on the same day, he mentioned that he had direct connections to that through friends, but the final decision rested with the athletic commission.

“Luckily for me, I have some friends who have the ability to — and pilots — get me to Vegas on very short-notice time, so I had that set up. Everything was good to go. But I think it ultimately came down to the athletic commission,” he added.

“Tony had already weighed in and they wanted to go that way instead. But I did accept, and I did speak to the UFC, and they were very thankful.”

Poirier to fight at UFC 281

Although he was unable to compete at UFC 279 with Diaz, Poirier is scheduled to face “Iron” Michael Chandler on November 12 at UFC 281.

It will be Poirier’s first performance in nearly a calendar year since his last appearance in December at UFC 269 against “Do Bronx” Oliviera. In the lightweight match, Oliviera made three attempts at submitting Poirier before winning.

🚨IN CASE YOU MISSED IT🚨

The highly anticipated @DustinPoirier & @MikeChandlerMMA bout is confirmed for #UFC281!

Poirier had a stellar record before the fight. He won three consecutive fights, which included victories over Conor McGregor in January and 2021.

He further claimed that this was not the first time he had received a short notice offer to fight Diaz.

“This isn’t the first time that they have called me to fight Nate on short notice. It’s not the first time I’ve accepted so they told me, ‘we appreciate you always being down,’ and that’s it.”

Poirier continued by saying that since Diaz is a free agent, it is unlikely the two would have a bout anytime soon.

“Outside of the UFC? He’s a free agent now, I still have a while to go before that’s even a possibility,” he explained.

“I still have a few fights, actually a good bit of fights left on my contract. There are certain fights that make sense on a day’s notice at 170 pounds but I don’t need to be fighting at 170 pounds if I can continue to make the weight smoothly.”

UFC 281 is gonna be CRAZIER than the Super Bowl & Wrestlemania combined! @stylebender vs @AlexPereiraUFC, @CarlaEsparza1 vs @MmaWeili, AND the People’s Main Event @DustinPoirier vs @MikeChandlerMMA. Best card ever imo. What do you think? 🤔🗽 #UFC281 pic.twitter.com/qviyBIai37