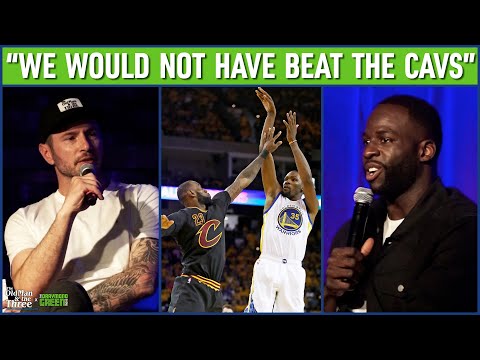 Draymond Green and Kevin Durant may have had the most notorious altercation, which resulted in the latter’s departure from the Golden State Warriors. Now that the Warriors have won their second championship, Draymond is well aware of KD’s contribution to Golden State’s strong run in the NBA.

Draymond made an appearance on a live episode of JJ Redick’s podcast “The Old Man and the Three.” He was asked how the Warriors would have fared if Kevin Durant had not joined them in the summer of 2016.

Draymond Green admitted to JJ Redick that without KD, the Warriors would have lost to the LeBron James-led Cleveland Cavaliers in 2017 and 2018. He claimed that their opponents had “figured them out.”

“I don’t think the outside world gave Kevin enough credit,” Green said. “I think if you came within our organization, Kevin was given all the credit. But the reality is, I don’t think that team wins another championship if Kevin doesn’t come. Now, you may say, ‘Oh, yeah, but you won the fourth one without Kevin.’ But there’s a gap in there where teams started to figure us out.”

The ease when the Warriors conquered the Cavaliers back-to-back in 2017 and 2018 makes it easy to overlook how capable those Cleveland teams were. Not only was James still at the top of his game in 2017, but Cleveland was an all-time aggressive major player, with a playoff offensive rating of 119.9.

Green responded differently when asked if the same circumstance adhered to James Harden’s Houston Rockets, Golden State’s biggest challenge in the Western Conference all those years.

“Yeah, we was beating them for sure. That team was never going to beat us. It just was not going to happen,” said the 32-year-old.

Durant was chastised after leaving the Oklahoma City Thunder to join the Golden State Warriors in 2016. Fans believe he should never play for a team that beat them in the playoffs. Detractors claim that KD took the easy way out. The arrival of Durant altered the NBA system.

Other teams have begun to assemble stacked rosters of superstars, known as “Super Team”. Durant chose to join the Nets in 2019 with another big name in Kyrie Irving, ending his outstanding record in Golden State, where he won two championships in three years.

With his admission, KD’s public criticism should be over. Green believed that Durant had not worked hard enough to become the Warriors’ leader. Instead, he was part of a loaded team that relied on him to defeat LeBron James and the Cavs. Golden State had a crowded roster at the time.

During his time in the Bay Area, Durant did not rely on his All-Star teammates. He instead contributed and rose to prominence. Regardless of what he said to his old colleague or the media propaganda, Dray had to give KD credit and acknowledge his valuable contribution.

Green seems to genuinely care about Durant as a person. He was the one who brought Durant to the Warriors to assist them in winning. Dray must be aware of the slim reaper’s prowess during a resurrected NBA dynasty’s reign. Moreover, Green also emphasized that Durant was the rightful Finals NBA MVP in 2017 and 2018 and that he is a vital part of the Warriors’ success.

Following the Warriors’ fourth title in eight years this season, combined with Durant’s contentious tenure with the Brooklyn Nets, has shifted the conversation against the former team member, with some questioning whether the Warriors really needed him to get back on track after losing to Cleveland. Green deserves praise for offering his honest opinion.