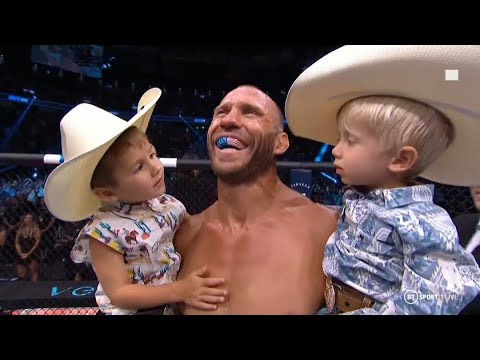 On Saturday, Donald Cerrone announced his retirement from MMA after losing the UFC 276 match to Jim Miller at the T-Mobile Arena. As a mixed martial artist, Cerrone competed in the welterweight division for UFC and is known for his nickname ‘Cowboy’. The 39-year-old kickboxer has a total of 55 matches in MMA and recorded 36 wins, 17 losses, and two matches that ended in no contests.

It was the submission loss to the 38-year-old Miller at UFC 276 that became Cerrone’s last match in UFC. Before the fight, he said that he wanted to fight for two more matches but eventually, he is now deciding to retire. According to some sources, he was under a lot of pressure due to “a winless period” in his career for three years.

Statistically, Cerrone is having his career fighting with 48 appearances between the WEC and UFC combined, including his fight against Miller. Both of them took place at UFC 26 as a rematch from eight years ago in 2014 and ended in Cerrone knocking miller out with his head kick.

Before the match, Cerrone’s last win was against Al Iaquinta in 2019. Cerrone has fought against other fighters in the lightweight division, namely Tony Ferguson, Justin Gaethje, and Conor McGregor.

On the other hand, Miller is having slightly better statistics than Cerrone. Before taking the fight in UFC 276, Miller was on a five-winning streak, including his last two winning fights against Erick Gonzales and Nikolas Motta. In total, since 2019, Miller has had himself fight at the Octagon 8 times.

JIM MILLER GETS HIS 24TH WIN, THE MOST IN UFC HISTORY 🏆

In this UFC 276 fight, Miller started to land an early leg kick to keep Cerrone at bay, but the Cowboy responded with another kick. At the two minutes mark, Cerrone slipped and Miller caught him off guard and landed a grapple.

Both Miller and Cerrone were on the floor and tried multiple submission holds. At the end of the round, Cerrone had his heel hook locked in to finish Miller but he was running out of time.

In the next round, Miller finished Cerrone with a guillotine after both of them landed a head kick. Then, Cowboy slipped and Miller had another advantage by jumping in to lock in another guillotine which resulted in Cerrone tapping the floor and giving up the win to Miller. With the win, Miller became the most wins fighter in the UFC.

Cerrone talks about his retirement

The Cowboy has said he might want to become a movie star after UFC retirement. Throughout his career, he said that he “doesn’t love fighting anymore.” For the record, Cerrone has tied Charles Oliveira for the most all-time ‘Fight of the Night’ bonuses with 18 wins in total.

Donald Cerrone retires after his loss to Jim Miller.

Respect, @Cowboycerrone. Massive respect. Great scene with his kids in there.

Cerone won 18 “Fight of the Night” bonuses, tied with Charles Oliveira for the most all-time. In his career, Cerrone came up short in some of the biggest fights, including three WEC title fights and one UFC title fight. He also gave the hype to his fans by having a blockbuster event against Conor McGregor in 2020.