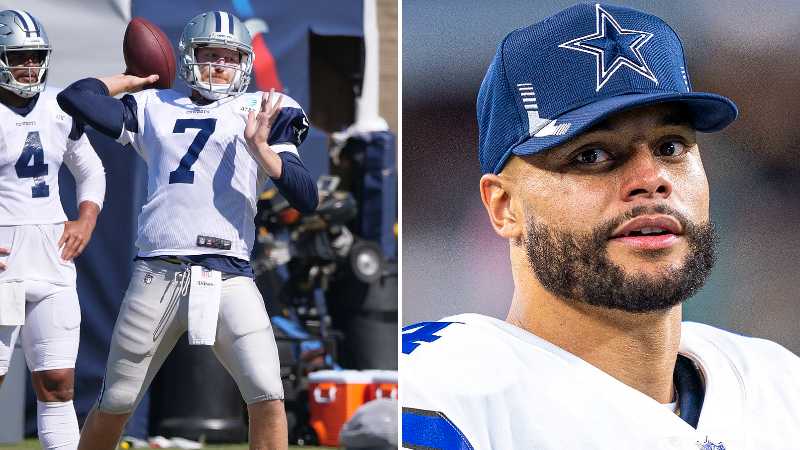 The five-time Super Bowl champions Dallas Cowboys are rumored to trade their quarterback Cooper Rush as they open for trade talks. However, the team’s board gave their clear statements, indicating that it is unlikely to happen anytime soon.

According to reports, the Cowboys CEO Stephen Jones was asked about incoming trade offers for Rush from other NFL teams. He said that he was not expecting Rush to move to another team in the near future.

The Cowboys reportedly considered their primary QB Dak Prescott’s salary and how he performed when fully fit, which sparked the QB controversy.

On the other hand, Rush, who is on his sixth season with the Cowboys, has led the offense as a replacement for Prescott. He contributed to a pair of wins with the Cowboys so far in this season.

A chuckling Stephen Jones told @1053thefan that the Cowboys are not receiving trade calls for Cooper Rush. He was asked

On September 26, Rush played his recent winning performance against the New York Giants. He compiled his perfect record as starting QB with 21 out of 31 completions for 215 passing yards and one rushing TD in the late fourth quarter.

According to several sources, Rush became one of the valuable players for the Cowboys’ offense. In his two starts this season, Rush accumulated 514 yards and racked up two touchdowns. He also managed to have a 73.3 player rating among the league’s quarterbacks.

In response to Rush’s performance, Cowboys owner Jerry Jones provided his analysis of his performance as the top quarterback.

“The purpose of the backup quarterback in the NFL is to be able to step in and have your team function on all the cylinders without having to give up some of your offense that your starter usually takes with him when he leaves.”

Fox Sports columnist Martin Rogers also voiced his opinion on Jones’ decision. He noted that Jones did not think the gap between Prescott and Rush is as excellent as that football analysts say.

Jones, on the other hand, made his remark following Rush’s performance against the Cincinnati Bengals.

“Wouldn’t it be a thing if you had a dilemma as to which way to go?” Jones told the reporters. “You do that if (Rush) gets to ten wins. Exact same point that occurred with Prescott (and Tony Romo). I believe like that.”

Rush gave his statement on his recent form, highlighting the things he has learned so far as a player.

“You learned a lot mentally, how to deal with things. There’s stories like that all around an NFL locker room,” he said, as quoted by ESPN. “Just kinda what this league is about, you’re going to get knocked down. It’s about coming back, learning from it and moving on.”

The Cowboys will face the Washington Commanders in Week 6 and Prescott has been confirmed to miss three consecutive NFL games.

According to multiple sources, the Cowboys will give Rush another chance to start in more games.