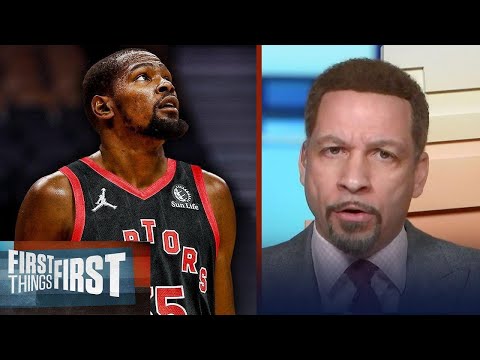 In an episode of First Things First, Chris Broussard of Fox Sports made several strange comments about the city of Toronto and Canada while discussing the chance of Kevin Durant traded to the Toronto Raptors.

Both Canadian basketball fans and members of the NBA media circle expressed their confusion, saying they did not take what Broussard was implying lightly.

Ultimately, upon receiving the backlash, Broussard explained what he meant on Twitter.

“I never said Blacks are ‘treated worse in Toronto’ than in America. Never! That’s ridiculous. I said living there is different and ‘not the same as living in America for Blacks.’ Very diverse city. But just 8% Black. I love visiting Toronto. Visiting,” he said.

Unfortunately, his statement did not do much to convince his detractors. Many pointed out that Phoenix had a smaller Black demographic than Toronto. The city is considered to be a favorite to acquire Durant.

For the time being, Broussard is one of the few people who are not fully on board with Durant moving to Toronto.

-him comparing Scottie Barnes to Ben Simmons
-saying maybe a Ben Simmons trade makes sense for the #Raptors
-"The best players they have tend to be the international guys… or DeMar DeRozan, Kyle Lowry, who weren't superstars." pic.twitter.com/iaSQnVeOcs

Details about Durant’s future after making a trade request to the Brooklyn Nets have been eagerly anticipated. Regardless of Broussard’s comments, Durant appears to have a good impression of Toronto and nothing but praise for the city.

Basketball fans have been discussing and debating if the teams should trade for Durant and which players should be included in an offer.

Although Durant reportedly prefered to be traded to either the Phoenix Suns or the Miami Heat, the Raptors have shown themselves to be a serious candidate to acquire Durant. Throughout the weekend, Toronto’s odds in recruiting Durant improved significantly, from +3000 on Friday, to the second-best odds at +250 on Sunday, according to DraftKings.

Toronto is not a new player when it comes to recruiting big names on the trade market. It is widely known for acquiring Kawhi Leonard from the San Antonio Spurs for DeMar Derozan in 2018. This move proved successful for the Raptors as they won their first-ever championship in 2019, before Leonard eventually left as a free agent in the following offseason.

Raptors president Masai Ujiri put his team directly in the front regarding the acquisition for Durant. After finishing in fifth place last season, the team might be a contender if they are able to pair two-way wing Pascal Siakam with Durant, who is one of the greatest scorers in basketball history.

The team has several star players that could be used for salary-matching purposes in Fred VanVleet. There are also two young players who still can improve, Gary Trent Jr. and O.G. Anunoby. Additionally, there is Scottie Barnes, the reigning NBA Rookie of the Year, although Brian Lewis from The New York Post said that the Raptors were reluctant with the idea of involving Barnes for Durant.