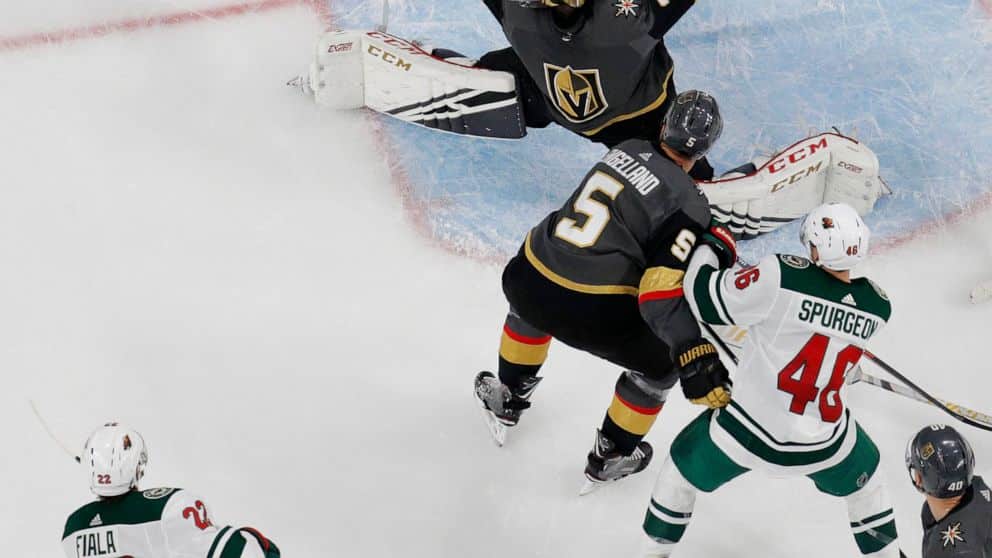 The Minnesota Wild will be looking for their fifth straight victory over the Vegas Golden Knights on Monday. Minnesota defeated Vegas the last time these teams met, winning 2-1 on April 3.

Here you can find the best picks, news, and stats for this West Division battle at the Xcel Energy Center. Vegas is the favorite at -125. This according to PointsBet Sportsbook, which puts the odds for Minnesota at +105 as the underdog.

Golden Knights Down Coyotes in OT

Jonathan Marchessault scored the game-winner 3:04 into overtime as Vegas defeated Arizona, 3-2. The Golden Knights had taken a 2-0 lead on goals by William Karlsson and Mark Stone, but Arizona battled back to tie the score, forcing overtime. Marc-Andre Fleury stopped 19 of 21 shots during the victory.

Vegas is first in goals allowed per contest at 2.16 and is second in penalty killing at 83.4%. Fleury is 23-10-0 with a 2.08 goals-against average and a .926 save percentage. Fleury has allowed two goals in five straight games and has allowed 10 total goals over his last six starts.

The Golden Knights are fifth in goals per game at 3.34 and are eighth in shooting percentage at 10.3%. They are 24th on the power play at 18.2%. Stone leads the team in assists with 37 and points with 57. Pacioretty is the team leader in goals with 24 and is second in points with 51.

Kevin Fiala scored the game-winner 2:16 into overtime to give Minnesota a 4-3 victory over St. Louis. The Blues had taken a 2-0 lead before Minnesota scored four of the next five goals. Fiala and Mats Zuccarello each scored a goal and added an assist for the Wild and Kaapo Kahkonen stopped 28 of 31 shots.

Minnesota has defeated Vegas the last four times these teams have met, and they are 5-1 in the last six meetings against the Golden Knights at home. Plus, the home team is 6-2 in the last eight meetings between these teams. The Wild sure have played exceptionally well against Vegas of late, and I look for that domination to continue here.

With two of the better defensive teams in the NHL, the under looks like the smart pick here. These teams have gone under in seven of the last 11 meetings between them. Vegas has gone under in four of their last five games, but Minnesota has gone over in five straight games, including four straight at home. Look for a great goaltending battle in this game, however.