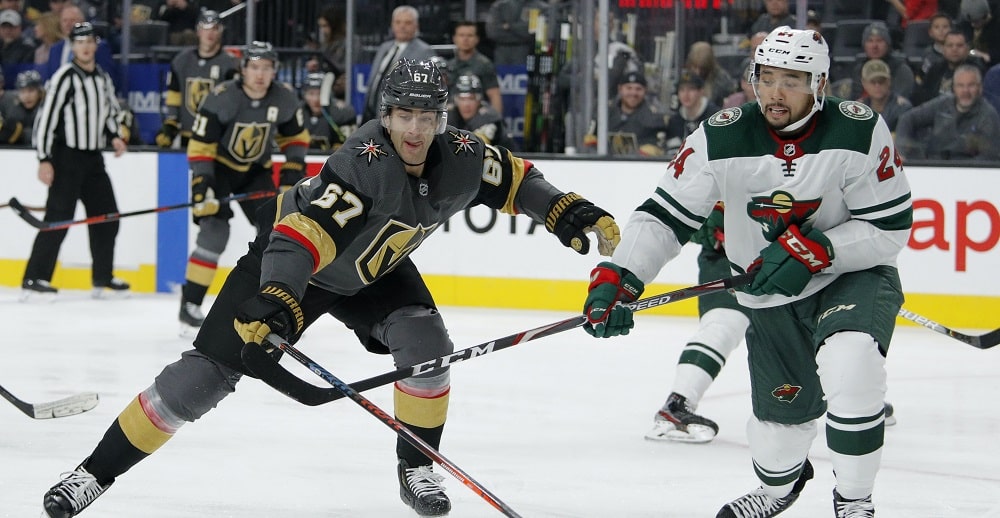 The Vegas Golden Knights will be looking for their third straight victory over the Minnesota Wild when these two teams square off on Monday. Vegas has won five straight games.

Here you can find the best picks, news, and stats for this East Division battle at the Xcel Energy Center. Vegas is the favorite at -120. This according to PointsBet Sportsbook, which puts the odds for Los Minnesota at +100 as the underdog.

Backup netminder Robin Lehner is still out for Vegas. The biggest loss is right-wing Mark Stone, the team’s leading scorer. He is listed as questionable for Monday’s game. The Wild will be a little thin up the middle as Marcus Johansson and Marco Rossi are both out.

Marc-Andre Fleury stopped all 24 shots he faced as the Vegas Golden Knights defeated the San Jose Sharks, 4-0. Mark Stone scored his sixth goal of the year but was lost later in the contest. Alex Tuch added a pair of second-period tallies for Vegas.

Vegas is fifth in the NHL in goals per game at 3.33 per contest. This despite a power-play that has not been very impressive. The Golden Knights are connecting on 18.2% of their power-play opportunities, 22nd overall. With Stone (27 points) out, extra pressure falls on Tuch and Max Pacioretty. The duo leads the team with 12 goals each. Pacioretty has 21 points while Tuch has 19.

Vegas has starred in the defensive end. They are second in the NHL in goals allowed at 2.10 per game and are fourth in shots allowed at 27.7 per contest. They have been excellent killing penalties as well, posting an 87.7% kill rate. Fleury has been unreal in the net, going 12-3-0 and 15 starts with a 1.60 GAA and a .942 save percentage. He leads the NHL with four shutouts.

Cam Talbot allowed four goals on 30 shots as the Minnesota Wild fell to Arizona, 5-2. Minnesota scored the first two goals of the game, then gave up five unanswered tallies. Jordan Greenaway scored his fifth goal of the season for Minnesota. He is second on the team with 18 points now.

Minnesota has been solid defensively, allowing 2.73 goals per game, 10th in the league. They are allowing 29.3 shots per game on average, 11th overall. Penalty killing has been outstanding at 83.3%, sixth overall. Talbot was rocked for the third straight time, giving him 13 goals allowed over his last three starts. One has to wonder if the coaching staff will turn to rookie Kaapo Kahkonen (2.30, .918) more frequently.

The Wild have been solid offensively as well. They are averaging 3.14 goals per game, 12th overall, and 30.9 shots per contest, ninth in the league. The power-play has been horrific though, connecting on 6.9% of their chances, last in the league. Rookie Kirill Kaprizov leads the team with 19 points.

Vegas is red-hot while Minnesota is struggling right now. The Wild have lost three of their last four games, but they have been solid at home (5-3-0). Vegas has been great everywhere (6-2-0 on the road). I already liked Vegas in this game, especially since Minnesota seems hell-bent on going with Talbot. There is no way he can match up with Fleury.

With two great defensive teams like this, you would think scoring would be low, but that has not been the case. In last Monday’s contest, the teams combined for nine goals and then combined for six two nights later. With the total being set at 5.5 for this contest, the over looks like the smart bet.

Minnesota has gone over in five straight games and they have gone over in four of their last five games at home. Yeah, I’ll take the over.