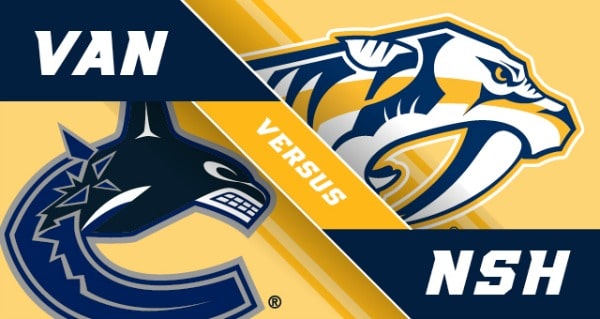 Bridgestone Arena is playing host to an enticing clash as the Nashville Predators prepare to face the visiting Vancouver Canucks. The match gets started at 8 p.m. ET on Thursday, November 21, and fans at home can watch this Western Conference matchup live on Sportsnet Pacific.

Playing the role of favorite will be Nashville (-180), while Vancouver is a dog showing moneyline odds of +160, and the oddsmakers have set the Over/Under (O/U) at an even 6 goals. The odds for betting the total stand at -120 over, +100 under.

Vancouver is 10-12 straight up (SU) and has lost 3.5 units for moneyline bettors thus far. Through 22 regular season contests, 12 of its games have gone over the total, while nine have gone under and just one has pushed. As the road team this season, the Nucks are 5-7 SU.

Vancouver has converted on 22.0 percent of its power play opportunities this year, a mark that places them in the top-10 among NHL teams. Its penalty kill is ranked 15th out of 31 teams, and the team’s successfully killed off 82.9 percent of all penalties.

Vancouver, as a collective unit, has been whistled for penalties 4.0 times per game in the 2019-20 season, and 3.2 per game over its past five contests. The team has been forced to kill penalties just 7.5 minutes per game over their last 10 outings.

Elias Pettersson and Brock Boeser will both be relied on to facilitate things for the visiting Canucks. Pettersson has 25 points via eight goals and 17 assists, and has recorded two or more points in seven different games. Boeser has nine goals and 12 assists to his credit (and has logged a point in 13 games).

On the other side of the ice, Nashville is 9-11 straight up (SU) and has lost 9.3 units for moneyline bettors this year. Through 20 regular season matches, 13 of its games have gone over the total, while seven have gone under and none have pushed. This season, the team is 6-6 SU as the home team.

Nashville has converted on 19.7 percent of its power play opportunities this season, a figure that’s right around league average. On the other hand, its penalty kill is ranked 22nd overall, and it’s successfully killed off 76.6 percent of all penalties.

Pekka Rinne has denied 23.2 shots per game as the primary choice in goal for Nashville. Rinne has eight wins, five losses, and two overtime losses and has maintained a poor .899 save percentage and 2.82 goals against average this year.

The home team offense will be led by Roman Josi (seven goals, 13 assists).

Nashville is 0-2 in games decided by shootout. Vancouver is 2-1 in shootouts.

For both of these teams, the total has gone over in three of their past five games.

Nashville has averaged 3.5 goals per game this year, but has been averaging 2.2 goals per contest in its last five contests (the team is 0-5 SU over that stretch).

Over Vancouver’s last ten games, six of them have been decided by two or more goals (the team is 2-4 in those games).