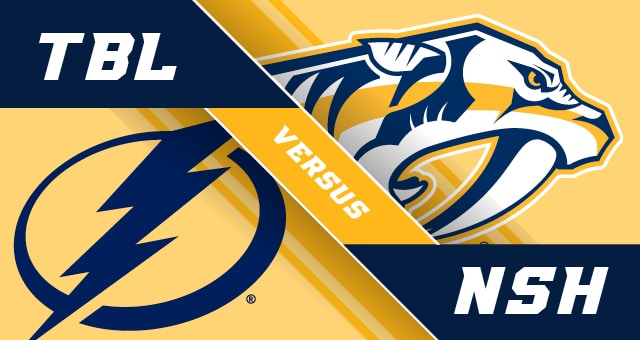 The Tampa Bay Lightning, fueled by Nikita Kucherov and Victor Hedman, are ready to take the ice against Roman Josi, Matt Duchene, and the Nashville Predators at Bridgestone Arena in an East-West tilt. NBC Sports Network will broadcast the matchup, which gets going at 8 p.m. ET on Tuesday, December 3.

Nashville is 12-14 straight up (SU) and has lost 10.2 units for moneyline bettors this year. That early-season winning percentage is a regression from the 47-35 record that the team managed during last year’s regular season campaign. Of the team’s 26 games this season, 16 have gone over the total, while 10 have gone under and none have pushed. The team’s 7-8 SU at home this season.

The Predators have converted on just 16.1 percent of their power play chances this season, a mark that’s ranked 24th overall in the NHL. On the other hand, their penalty kill is ranked 27th overall, and they’ve successfully killed off 75.3 percent of all penalties.

Boasting a .898 save percentage and 22.9 saves per game, Pekka Rinne (9-6-2) has been the primary option in goal for the Preds this season. If Nashville chooses to give him a breather, however, the team may turn to Juuse Saros (3-11-11 record, .891 save percentage, 3.12 goals against average).

Over on the other bench, Tampa Bay is 12-12 straight up (SU) and has lost 7.3 units for bettors taking the moneyline thus far. Through 24 regular season matches, 15 of its games have gone over the total, while nine have gone under the total and none have pushed. As the away team this season, the Lightning are 6-7 SU.

The Lightning have converted on 30.0 percent of their power play opportunities this season, a figure that places it in the top-five among NHL teams. On the other hand, its penalty kill unit is ranked 21st overall and it’s successfully killed off 78.3 percent of all penalties.

Andrei Vasilevskiy (28.4 saves per game) has been the primary option in the net for Tampa Bay. Vasilevskiy owns a 9-8-1 record, and has registered a .906 save percentage and 2.96 goals against average this year.

Over Nashville’s last ten outings, six of them have been decided by two or more goals (the team is 2-4 in those games).

The Lightning are 5-2 in games where they serve fewer penalty minutes than their opponent and 6-4 when they’re in the penalty box for fewer than 10 minutes, total.

The total has gone over in four of Tampa Bay’s last five games.

Nashville has averaged 10.4 giveaways over its last five home games, a rise over its season average of 9.5 giveaways per game (the 11th-fewest in the league).

Tampa Bay skaters have given out the eighth-most hits in the league (23.9 per game).