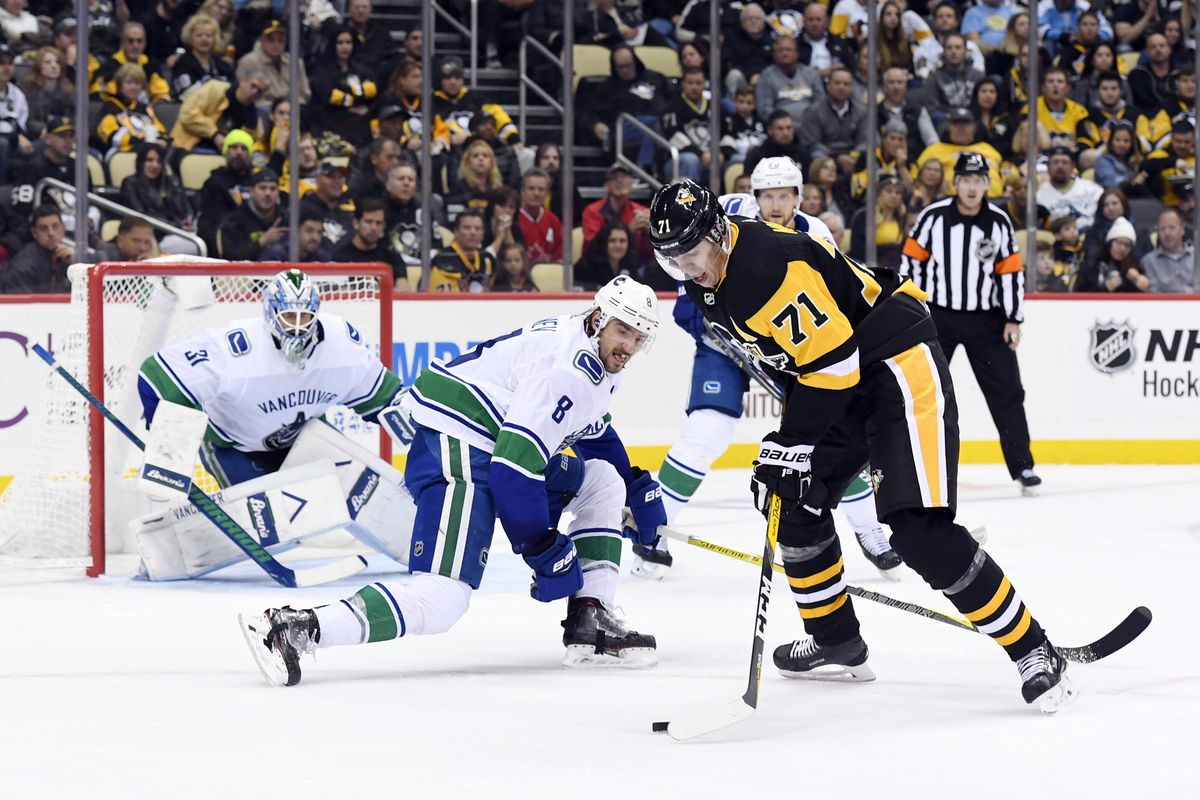 Jake Guentzel, Evgeni Malkin, and the Pittsburgh Penguins will do battle against Brock Boeser, Elias Pettersson, and the Vancouver Canucks at Rogers Arena for a cross-continent showdown. AT&T SportsNet Pittsburgh will air the action, which gets going at 10 p.m. ET on Saturday, December 21.

Pittsburgh is 21-14 straight up (SU) and has netted 1.8 units for moneyline bettors this season. Through 35 regular season outings, 18 of its games have gone under the total, while 15 have gone over and just one has pushed. This 2019-20 Penguins team is 7-8 SU on the road.

Pittsburgh has converted on 17.2 percent of its power play chances this year, a mark that’s right around league average. On the other hand, its penalty kill is ranked 13th overall, and it has successfully killed off 82.4 percent of all penalties..

Boasting a .897 save percentage and 24.0 saves per game, Matt Murray (11-10-4) has been the best option in goal for Pittsburgh this year. If head coach Mike Sullivan decides to rest him, however, Pittsburgh could turn to Tristan Jarry (11-5 record, .939 save percentage, 1.86 goals against average).

On the other side of the ice, Vancouver is 17-19 straight up (SU) and has lost 2.8 units for moneyline bettors this year. Through 36 regular season matches, 19 of its games have gone over the total, while 15 have gone under and just two have pushed. This season, the team is 9-8 SU at home.

The Canucks have converted on 24.3 percent of their power play chances this season, a figure that’s good enough for sixth-best in the league. On the other hand, its penalty kill is ranked 16th overall, and it’s successfully killed off 80.3 percent of all opponent power plays.

Jacob Markstrom has stopped 29.3 shots per game as the top choice in goal for the Canucks. Markstrom has 10 wins, 14 losses, and three OT losses to his name and has recorded a mediocre 2.75 goals against average and a .914 save percentage this year.

The Canucks are 3-1 in games that go to shootout. The Penguins are 2-0 in shootouts.

The total has gone under in three of Pittsburgh’s last five outings.

Pittsburgh has attempted 33.5 shots per game overall this season (the second-most in the NHL), and 29.8 in its last five road games.

Eight of Pittsburgh’s last ten games have been decided by two goals or more. The team is 5-3 in those games.

Pittsburgh skaters have accounted for the third-most hits in the league (29.7 per game), but the team’s recorded just 18.8 hits over their last five away games.