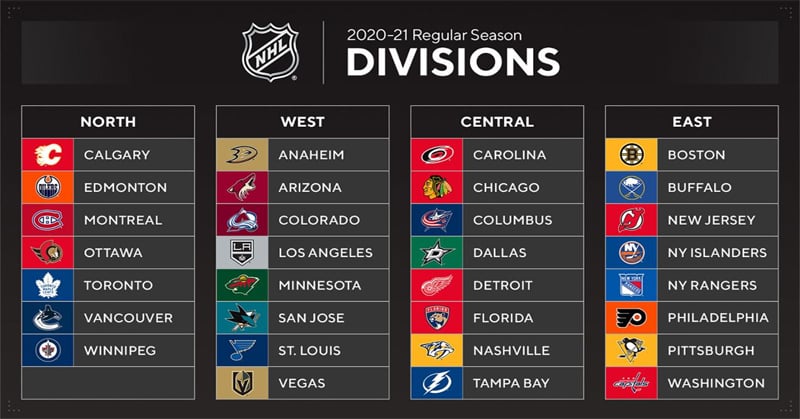 The NHL season is going to be vastly different from any others that we have ever seen. The league’s divisions have been realigned to feature an all-Canadian North Division. The East and West Divisions are made up of teams that were all in the same conference last season, but the Central Division is a mix-up of Eastern Conference and Western Conference teams.

With 56 games on the condensed regular season schedule, all games will be played within the division. That means that losing streaks are going to be extremely costly and every game is going to hold tons of importance.  The top four teams in each division will make the playoffs.

There are no bubble situations for now, as all 31 teams will play home games in their respective cities. Some teams will be allowed to have fans, while others will not, including all seven Canadian teams.

In advance of Wednesday’s Opening Night, a lot of odds are being posted around the betting markets, including odds to win the division at BetMGM Sportsbook.

Before we break those down, there are a couple of important things to remember. With the condensed schedule, backup goaltenders are likely to play a larger percentage of games than normal, so you’ll want to handicap each team’s goaltending situation very closely.

The other is that there are only 56 games and all are played against division foes. Some teams simply won’t match up well against teams in their division for one reason or another. That will make it very hard to compete night in and night out, so you only need to handicap these teams relative to their division rivals.

Let’s take a look at the odds for each division and a quick betting breakdown:

Speaking of goaltending depth, this is probably the weakest of the seven divisions. The Maple Leafs are the most proven commodity, so they are the clear-cut favorites for the North Division crown. The Oilers have the division’s best player in Connor McDavid, but are suspect on defense and in net with Mikko Koskinen and Mike Smith.

The Canadiens have Carey Price, who is the most accomplished goaltender in this division, but may play second fiddle to Winnipeg’s Connor Hellebuyck and maybe even third fiddle behind Calgary’s Jacob Markstrom, who was excellent last season and in the bubble for the Canucks. Vancouver is now backstopped by Thatcher Demko and Braden Holtby.

The Senators are a very, very young team that looks to be an absolute force in a season or two with a ton of burgeoning talent.

As far as a pick in this division, I think this is the highest variance of the divisions. Frankly, all of these teams are flawed and I don’t believe the favorites have the best goaltending. Calgary is something of a sleeper to me at +550 with good talent down the middle and a big upgrade in net with Markstrom.

This division will come down to the team that can feast on the California teams. As the lines imply, this appears to be a three-horse race between the Avalanche, Golden Knights, and Blues. The team that has the most success matching up with the Sharks, Ducks, and Kings, who are three of the six longest shots to win their respective divisions per the BetMGM odds, will have the best chance of emerging.

This is a tough division because the Avs, Golden Knights, and Blues all play such different styles. Colorado is a skill-based attack with a lot of promise as a team that many liked to win the Stanley Cup before last season’s shutdown. The Avalanche play a speed game with a lot of skill, which may be tough to do early in the season with limited practice time and no preseason.

That could allow a team like the Blues, that plays more of a physical, bump-and-grind style to get off to a quicker start. Vegas more or less plays a combination of the two and seems to be the most balanced of the teams here. Vegas also has good goaltending depth with reliable Marc-Andre Fleury in the backup role behind Robin Lehner.

Jordan Binnington regressed for the Blues after his Cup-winning season. The Avs did get great play from both Philipp Grubauer and Pavel Francouz. I lean with Vegas at the slightly better price over the Avs, but I think this is actually a two-horse race.

Things are off to an inauspicious start for the Central Division. The Stars have COVID issues and the start of their season has been pushed back to the point where they will play 56 games in 110 days. The Blue Jackets also stopped practicing a few days in advance of the season due to COVID concerns and protocols. Spikes in the Tampa Bay area caused the team to announce that they will not be welcoming fans into games for the next little while.

It is a tough way to start the year, as COVID spikes have to have teams on edge. The reigning Stanley Cup Champion Lightning are a deserving favorite, but a bubble hangover is a very real possibility.

The goaltending for the Hurricanes is a concern and it may simply be too much to overcome, despite a great roster. Had Dallas not run into these COVID issues, they would have had a compelling case at +500 with great goaltending depth and a solid roster. Nashville’s Juuse Saros is better than he played last season, but we may have to see it to believe it.

The Panthers are an interesting wild card to me. This is a very talented roster that was on the cusp of a playoff spot in spite of a career-worst season from Sergei Bobrovsky. Can he put it behind him to return to the form he had in Columbus? At +1200, it might be worth a long shot look.

It’s pretty easy to just default to the Lightning, who should win this division, but I’m up for taking a long shot gamble here.

This looks to be the best division in the NHL. The Bruins are the highest-priced favorite and no other division has four teams at +500 or lower and especially not six teams at +800 or lower. The Metropolitan Division was the best in the NHL last season and the East Division added the best regular season team from the Atlantic in the Bruins.

This division is loaded to say the least. The Bruins are out to prove something after a premature playoff exit, but they felt slightest about how the bubble format played out after being eight points better than any other Eastern Conference team in the regular season.

There are some questions in net for the Flyers, Penguins, and the Capitals, who will go with young backstops in Carter Hart, Tristan Jarry, and Ilya Samsonov. The Bruins seem like a safer bet in net with Tuukka Rask and Jaroslav Halak. The Rangers also go young with Igor Shesterkin.

At +250, the Bruins seem to have decent value. While this division is indeed very good, the Bruins clearly have the best goaltending situation and as much talent as any of the others.