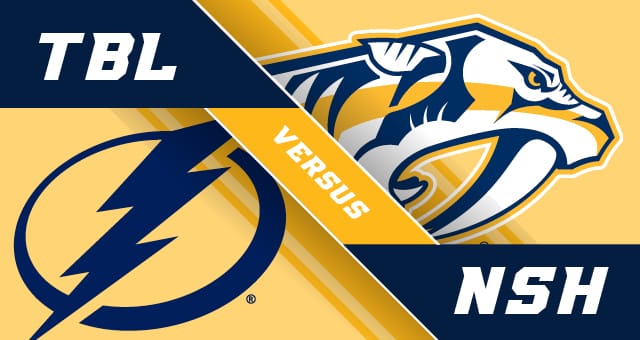 There are 12 games around the National Hockey League on Saturday, January 30, including the Central Division showdown at Amalie Arena in Tampa, Florida, so I bring you the best Nashville Predators vs. Tampa Bay Lightning betting pick along with the latest odds update on BetRivers Sportsbook.

Nashville has owned Tampa Bay over the last ten years, winning 13 of their previous 17 encounters. However, for the first time, the Lightning will meet the Predators as reigning NHL champions.

The Predators search for their third straight victory

The Nashville Predators (4-3-0) are coming off a two-game home set against the Chicago Blackhawks. It was a thrilling series, as the Predators barely outlasted the Blackhawks 3-2 in overtime and 2-1 in a shutout.

Juuse Saros was Nashville’s hero last Wednesday, saving all three attempts in a shutout while posting 29 stops in the regulation and overtime. The Predators took 42 shots towards Chicago’s goalie, but only Ryan Carpenter found the net, tallying his first goal of the season.

The Predators score only 2.00 goals per game and are tied for the second-fewest in the league. Interestingly, they lead the NHL in shots per game (35.2) while posting the worst power-play percentage. The Predators are only 2-for-36 with the man advantage.

The Lightning start a four-game homestand, hope to stop their slide

The Tampa Bay Lightning (3-1-1) opened the season with three straight wins but suffered a couple of surprising losses in their previous two showings. After a heavy 5-2 defeat at Columbus, the reigning champs lost at Carolina 1-0 in overtime this past Thursday.

Andrei Vasilevskiy had another great game, turning aside 34 of 35 shots, but his teammates let him down, failing to score on 32 shots towards Petr Mrazek. The 26-year-old Russian is now 3-1-1 on the season and has a 1.98 GAA with a .932 save percentage.

Tampa Bay scores 3.00 goals per game (tied-12th in the NHL) on 34.2 shots (tied-3rd). The Lightning have the 13th-best power-play percentage, converting three of their 14 opportunities, and only Florida had fewer power-play opportunities than Tampa.

The Lightning will be keen to get back on the winning path. They are a much better team than Nashville, especially on the offensive end, and will hopefully prove it on the ice.

The Predators have the worst penalty-killing percentage in the league, allowing a whopping ten goals on 26 opportunities. Hereof, the Lightning should get a few chances to improve their record. Also, after going scoreless on 32 shots against the Canes, the reigning champs should do a much better job in this one.

The last five encounters between the Predators and Lightning went in the under, producing exactly five goals in total each. That’s some intriguing stats, and I’m looking for six or more goals in Saturday’s game even though both teams have been playing solid defense thus far.

Besides a 7-0 loss at Dallas, the Predators have done a good job, while the Lightning are one of the best defensive teams thanks to Andrei Vasilevskiy.

However, I’ve mentioned that Nashville takes the most shots per contest, while Tampa is tied for the third-most. Furthermore, the Predators have been horrible with the man advantage, and that will have to change eventually.