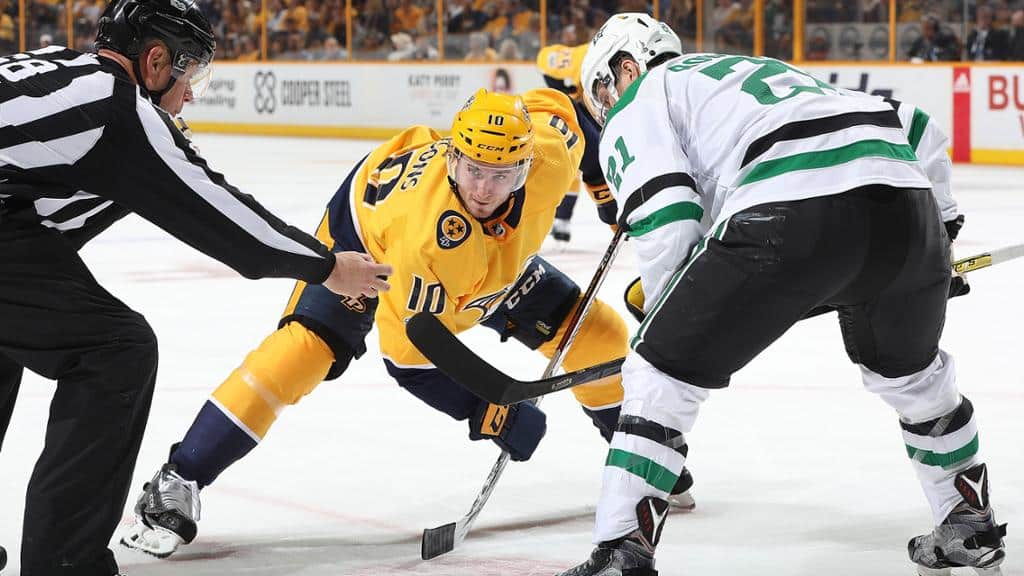 The Nashville Predators and Dallas Stars open a two-game set at American Airlines Center in Dallas on Monday, February 15, 2021, so here’s the best betting pick for this Central Division showdown along with the latest odds on BetMGM Sportsbook.

Nashville and Dallas already played a two-game series in Texas earlier in the season, and the Stars swept the Predators, beating them 7-0 as -115 favorites and 3-2 at even odds. This time, the Stars are firm -155 favorites for the opening clash of a two-game set.

Dallas still misses goalie Ben Bishop, center Tyler Seguin, and winger Alexander Radulov. On the other side, Nashville is without five players including defenseman Mattias Ekholm and center Ryan Johansen.

The Nashville Predators (6-9-0) hit the road after another disappointing performance, as they couldn’t sweep the lowly Detroit Red Wings on the home ice. After a narrow 3-2 last Thursday, the Predators disappointed their fans with a 4-2 defeat on Saturday night.

Nashville continues to struggle, scoring only 2.33 goals per contest (28th in the NHL) and allowing 3.47 in a return (26th). The Predators went only 8-for-55 with the man advantage while yielding the most power-play goals in the league (19).

The Stars dropped five in a row

The Dallas Stars (5-3-4) are riding a five-game losing streak following a 4-3 shootout to the Carolina Hurricanes this past Saturday. During their awful run, the Stars suffered a couple of overtime defeats to Chicago along with a 4-3 loss at Columbus and a 5-3 loss to Carolina.

Dallas is 10th in the NHL in goals scored per game (3.33) and 13th in goals against (2.67). The Stars own the fourth-best power-play percentage, going 16-for-48 with the man advantage, while their penalty-killing percentage is the 13th-worst in the league, yielding 11 goals on 50 opportunities.

Rookie Jake Oettinger has guarded the cage in three of Dallas’ last four contests, and he’s 2-0-3 on the season, posting a 2.31 GAA and a .910 save percentage. Anton Khudobin is 3-3-1 with a 2.75 GAA and a .902 save percentage, and he should patrol the crease Monday against the Predators.

This is the clash of the two struggling teams. On paper, Dallas is a better team than Nashville, so I’m expecting the Stars to bounce back and put an end to their terrible losing streak. They’ve dominated the Predators over the last few years, winning seven of their previous nine encounters.

The Stars should torture the Predators offensively. Nashville owns the second-worst penalty-killing percentage, allowing the fourth-most power-play opportunities, while the Stars have been terrific with the man advantage thus far.

The under is 5-2 in the last seven matchups between Nashville and Dallas, but I don’t expect to see a low-scoring affair Monday. Both teams desperately need a win, but they cannot lean on their defenses too much, especially the Predators.

I’ve mentioned the visitors’ woes with penalty killing and the hosts’ prolific special teams. The Stars netted 12 goals in two games against the Predators this season, while the over is 5-2 in Dallas’ previous seven games overall.