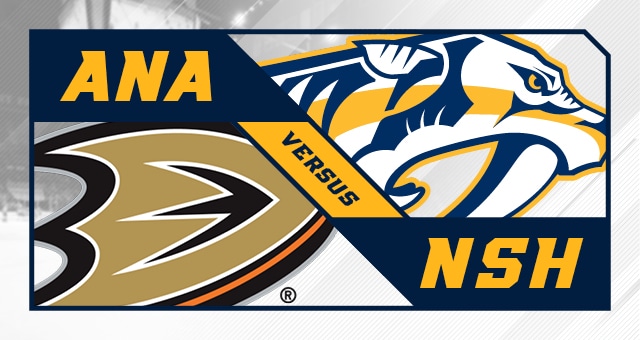 Two of the most frequently-penalized clubs in the league, the Nashville Predators and the Anaheim Ducks meet at the Honda Center. This Western Conference matchup gets underway at 10 p.m. ET on Sunday, January 5, and it is being shown live on NBC Sports Network.

Nashville has converted on just 16.3 percent of its power play chances this season, a mark that’s ranked 25th in the NHL. Its penalty kill is ranked 27th overall, and the team’s successfully killed off only 74.8 percent of its penalties.

For the team as a whole, Nashville has been penalized 3.9 times per game in the 2019-20 season, 4.0 per game over its past five games total, and 4.2 per game over its last five on the road. The team has been forced to kill penalties 9.0 minutes per contest over their last five road games.

With a .896 save percentage and 23.3 saves per game, Pekka Rinne (14-11-3) has been the primary option in goal for Nashville this year. Rinne did just play last night, however, so Nashville could decide to rest him and instead go with Juuse Saros (5-15-3 record, .890 save percentage, 3.23 goals against average).

The visiting Predators have relied heavily on Roman Josi and Filip Forsberg this season. Josi has 43 points on 14 goals and 29 assists, and has recorded multiple points in 11 different games. Forsberg has 14 goals and 14 assists to his name (and has registered at least one point in 22 games).

On the other side of the rink, Anaheim is 16-25 straight up (SU) and has lost 9.9 units for moneyline bettors thus far. 22 of its contests have gone over the total, while 19 have gone under and none have pushed. The team’s 10-10 SU at home this year.

Anaheim has converted on just 14.3 percent of its power play opportunities this season, a mark that’s ranked 31st in the NHL. On the other hand, its penalty kill is ranked 21st overall, and it’s successfully killed off 78.6 percent of all penalties.

John Gibson (28.4 saves per game) has been the top selection in goal for Anaheim. Gibson has 12 wins, 19 losses, and three overtime losses to his name and has recorded a pedestrian 2.92 goals against average and a subpar .907 save percentage this season.

The home team offense will be led by Jakob Silfverberg (15 goals, 13 assists).

The Predators have averaged the league’s third-most shots on goal (34.1) and Anaheim has attempted the 27th-most (only 29.2).

The Ducks are 4-9 when the team serves fewer penalty minutes than their opponent and 9-11 in games where they’re in the penalty box for fewer than 10 minutes, total.

Two of Anaheim’s past 10 outings have gone to a shootout. The team’s 2-0 in those games and 3-1 overall in shootouts this season.