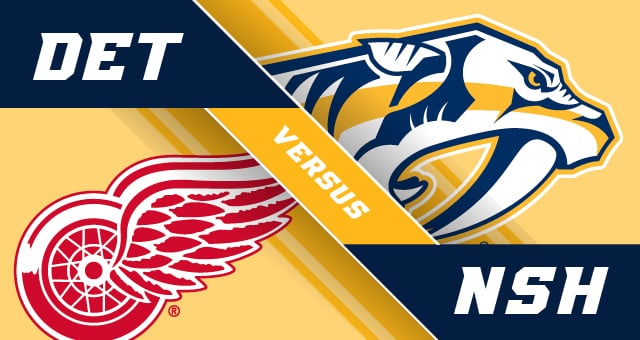 The Detroit Red Wings and Nashville Predators will open their eight-game regular-season series Thursday at Bridgestone Arena in Nashville, Tennessee, meeting each other as the two worst teams in the Central Division.

Hereof, I’ve prepared all need-to-know betting tips and stats along with the best betting pick for the Red Wings vs. Predators showdown. Detroit opened as a +162 moneyline dog on BetRivers Sportsbook, while Nashville is a firm -180 fave to win straight up.

The visitors are still without winger Tyler Bertuzzi and goalie Jonathan Bernier. On the other side, the Predators cannot count on centers Ryan Johansen, Brad Richardson, and Luca Sbisa due to upper-body injuries.

The Detroit Red Wings (3-9-2) enter Thursday’s clash as the worst team in the Central Division, laying a couple of points behind the Predators. They’ve won only one of their last ten games overall while earning four points in that span.

Over their previous four showings, the Red Wings suffered a couple of losses at Tampa Bay, 3-1 and 5-1, and split a two-game set at Florida. After a surprising 4-1 victory over the Panthers, the Red Wings lost 2-1 to Florida this past Tuesday.

Thomas Greiss played between the pipes in the previous eight contests and should get another starting nod in Nashville. The 34-year-old goalie is 1-8-2 on the season and owns a 2.90 GAA and a .904 save percentage.

The Predators hope to snap their three-game slide

The Nashville Predators (5-8-0) have won just one of their last six games overall, outlasting the Florida Panthers 6-5 in overtime on the road. They also suffered a 2-2 defeat at Florida during that awful run, while the remaining four losses came against the reigning NHL champions, the Tampa Bay Lightning.

The Predators are coming off a two-game home set against Tampa, losing 4-1 and 6-1 in the process. In their previous three outings, the Predators couldn’t score more than a goal, so they desperately need to get things going against the hapless Red Wings.

Nashville scores just 2.13 goals per contest (29th in the NHL). Interestingly, the Predators take the fifth-most shots per contest (33.1), and their shooting percentage of 7.3 is the third-worst in the NHL. Nashville is 7-for-49 with the man advantage, and that’s the tenth-worst record in the league.

The Predators had some tough time in the office, facing off against the Lightning four times in their previous six outings. Therefore, a home clash against the Red Wings is a wonderful opportunity for Nashville to bounce back, and I expect the Predators to satisfy the odds.

The hosts will get things going eventually, considering their offensive efforts. The Predators’ defense is a problem, for sure, but the Red Wings possess the worst offense in the NHL for a reason. Interestingly, the Predators are winless in six straight home encounters with the Red Wings, and that ridiculous streak will come to an end.

As I’ve mentioned, the Predators have struggled mightily on the offensive end in their last three games. This time, they square off against the seventh-worst defense in the league, so I’m looking for at least three goals in Detroit’s net.

On the other side, the Red Wings will look to take full advantage of Nashville’s shaky defense, so I’m going with the over on the totals. Still, the Predators to win straight up is my best pick here.