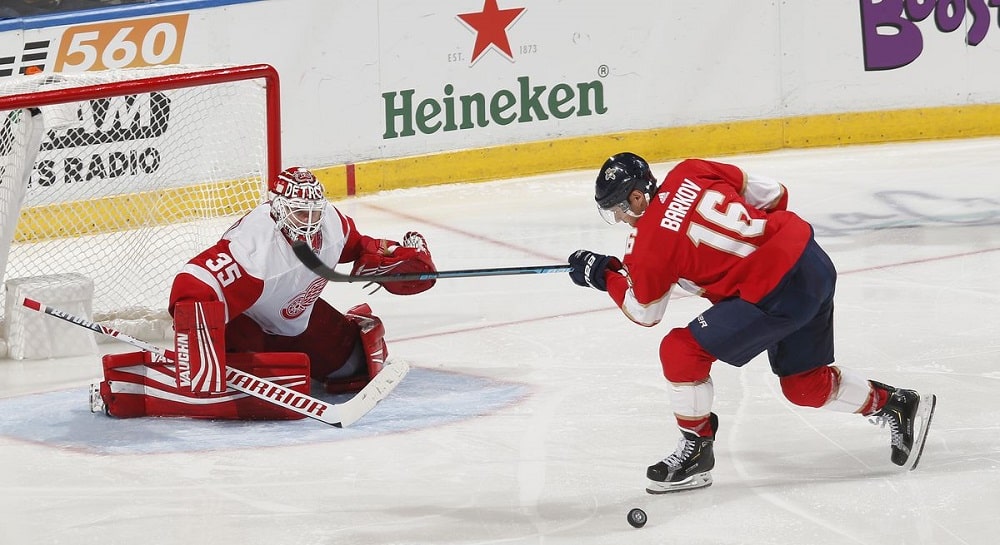 Two old foes from the Atlantic Division continue their eight-game regular-season series on Sunday, February 7, 2021, so I bring you the best Detroit Red Wings vs. Florida Panthers betting pick along with the latest odds on PointsBet Sportsbook.

Back in January, the Panthers swept the Red Wings in a two-game set in Detroit, beating them with an identical 3-2 result, though the Red Wings forced overtime in the opener. This time, Florida opens as a firm -225 moneyline home fave to beat Detroit.

The Panthers miss defenseman Gustav Forsling (upper body). On the other side, the Red Wings are without goalie Jonathan Bernier and winger Tyler Bertuzzi due to upper-body injuries.

The Detroit Red Wings (2-8-2) are on an eight-game losing streak following a 3-1 defeat at the Tampa Bay Lightning this past Friday. They battled bravely against the reigning NHL champions, taking 28 shots and even breaking the deadlock midway through the first period.

However, it wasn’t enough against the in-form Andrei Vasilevskiy, as the Red Wings scored just once for the third time in their last six outings. Detroit is the most inefficient team in the NHL, scoring a paltry 1.83 goals per game.

The Red Wings surrender 3.58 goals per contest and are tied with Edmonton for the third-most in the league. Thomas Greiss guarded the cage in the previous six games, and he’s 0-7-2 on the season, posting a 3.27 GAA with a .892 save percentage.

Florida looks to stay on the right track

The Florida Panthers (6-0-2) are coming off a 2-1 win to Nashville this past Friday, splitting a two-game home series with the Predators. They bounced back from a 6-5 overtime defeat on Thursday night, overcoming an early deficit.

Centers Carter Verhaeghe and Aleksander Barkov scored one goal each to lift their team over the Predators, and the Panthers took 11 shots more than their opponents (36-25). Florida scores 3.07 goals per contest, enough for the 13th-best in the NHL.

Goalies Chris Driedger and Sergei Bobrovsky got four starting nods while posting a 3-0-1 record each, and I expect Bobrovsky to play between the pipes Sunday after Driedger turned aside 24 shots in that 2-1 win over Nashville. Sergei has a 3.57 GAA with a .881 save percentage, while Driedger posted a 1.72 GAA with a .942 save percentage.

The Panthers have owned the hapless Red Wings over the last few weeks, winning their previous eight encounters. Although Florida covered the 1.5-goal spread just three-times in that stretch, I expect the Panthers to dominate Detroit on Sunday and win by two or more goals.

The under is 4-1 in the last five meetings between the Red Wings and Panthers, but I’m looking for a high-scoring affair Sunday with six or more goals in total. The Panthers have a lot of dangerous weapons in their arsenal, but they haven’t impressed defensively, especially with Sergei Bobrovsky between the pipes.

Florida allowed two or more goals in each but one game this season, so the Red Wings have a nice opportunity to finally score more than just one goal.