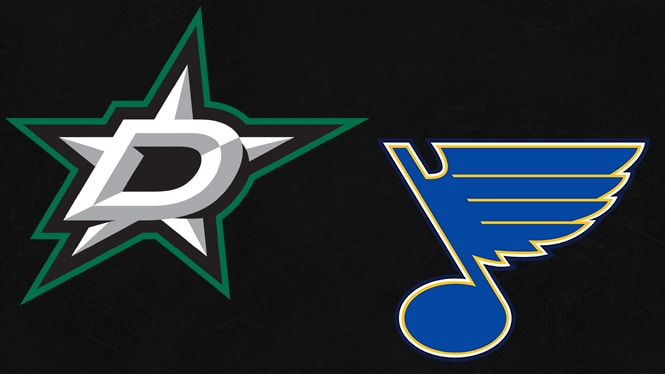 The Dallas Stars take on the reigning champs St. Louis Blues at Rogers Place in Edmonton, Alberta, on Sunday afternoon to decide the No. 3 seed in the Western Conference. Both teams have dropped their first two games in the bubble and will try to bounce back before the start of the 2020 Stanley Cup First Round.

These two Central Division foes have met each other five times this past regular season, and the Blues have won the series 4-1. They also met in the 2019 Stanley Cup Second Round when the Blues outlasted the Stars in seven games.

The Stars miss defenseman Taylor Fedun (unfit), while goalie Ben Bishop should be available for the round-robin finale. The Blues cannot count on center Ivan Barbashev who’s left the bubble, as his wife is expecting the child. Barbashev tallied 11 goals and 15 assists last regular season.

The Blues are -135 favorites to win straight up on BetAmerica, while the Stars are +120 underdogs on BetMGM. The total of 5.5 goals has been set on William Hill, and the over pays +122.

The winner will earn the No. 3 seed in the West, while the losing team will settle with No. 4.

The Stars opened the round-robin tournament with a 5-3 loss to the Vegas Golden Knights, blowing a 3-1 lead. It was a painful loss, and the Stars fell apart in the second game, losing to Colorado Avalanche 4-0.

The Blues, on the other side, lost to the Avalanche 2-1, conceding the second goal one second before the end of the game. After that devastating loss, the reigning champs blew a 2-0 and 4-3 lead in a 6-4 defeat to the Golden Knights.

Hereof, I’m not sure who’s less damaged psychologically ahead of Sunday’s clash.

As I’ve mentioned, the Blues dominated the Stars in the regular season winning four of their five encounters. They won a couple of games in 2019 (3-2 at home and 3-1 on the road) and a couple of more this past February (5-1 in Dallas and 4-3 shootout win in St. Louis).

Ben Bishop guarded the cage for the Stars in the opener, yielding four goals on 32 shots. Anthon Khudobin also allowed four goals to the Avs, but he posted 36 saves. Bishop went 0-3 against the Blues in the regular season and considering his fitness, I expect to see Khudobin between the pipes on Sunday.

Khudobin was 16-8-4 with a 2.22 GAA and a .930 last regular season, while the Stars had the second-best defense in the NHL, allowing only 2.52 goals per game. The Blues were fifth with 2.66 goals conceded per contest.

Jordan Binnington should get another start for the Blues after patrolling the crease in the first two games of the round-robin tournament. He was 30-13-7 with a 2.56 GAA and a .912 save percentage in the regular season, going 1-1 in just two starts against the Stars.

Although anything can happen in hockey, especially in the Stanley Cup, this should be a low-scoring affair. The stake is huge and both teams are capable of playing tough defense. Furthermore, the Stars were averaging only 2.58 goals per game during the regular season, while six of the previous eight meetings between Dallas and St. Louis produced fewer than six goals in the total.

When I say anything can happen, it means this game could easily go either way. The betting trends are suggesting the NHL Pick is the Blues, but the Stars are a very dangerous team. Also, I’ve mentioned that both teams have suffered some very painful losses in the bubble, and I’m not sure who’s going to bounce back.