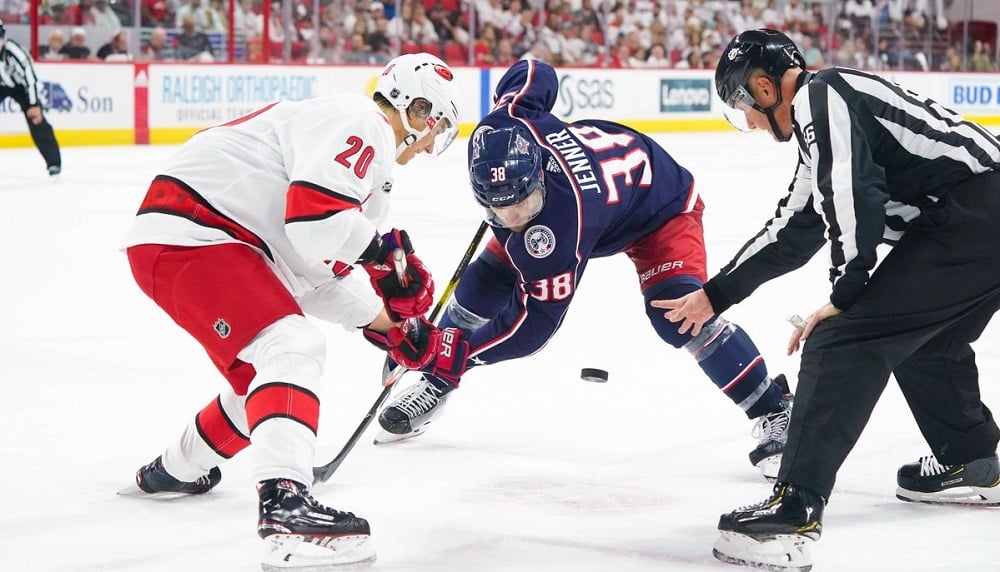 The Carolina Hurricanes and Columbus Blue Jackets will wrap up a two-game set at Nationwide Arena in Columbus on Monday night, so here’s the best betting pick for their second meeting of the season along with the latest odds update on PointsBet Sportsbook.

The Hurricanes beat the Blue Jackets 6-5 in the opening clash of their eight-game regular-season series on Sunday afternoon, satisfying the odds as -150 moneyline favorites. They are listed at -138 for Monday’s game, while the Jackets sit at +125 to win straight up.

Carolina is still without its starting goalie Petr Mrazek (thumb) and center Martin Necas (upper body). On the other side, Columbus misses goalies Matiss Kivlenieks and Elvis Merzlikins due to upper-body injuries. Wingers Gustav Nyquist (shoulder) and Brandon Dubinsky (wrist) and defenseman Zach Werenski are sidelined, too.

After five straight losses to Columbus, the Carolina Hurricanes (7-2-0) finally defeated the Blue Jackets in what was a proper firecracker on Sunday afternoon. The teams combined for 11 goals on just 48 shots and the Canes rallied from a one-goal deficit three times before putting the game on ice midway through the third period.

Six players found the net for Carolina including defenseman Dougie Hamilton who’s scored his first goal of the season. Hamilton has seven assists on his tally, while winger Andrei Svechnikov leads the way for the Canes this season with six goals and four assists.

James Reimer took over the crease in Petr Mrazek’s absence and started the previous five games for Carolina. He’s 5-1-0 on the young season and has a 3.13 GAA with a .883 save percentage. The Canes are 15th in the league in goals against (2.77) and tied-12th in goals scored per contest (3.23).

The Columbus Blue Jackets (5-5-3) will close down a four-game homestand Monday, trying to get back on the winning path. After a 3-1 defeat at Chicago, the Jackets lost to Dallas 6-3 last Tuesday, but they bounced back with a 4-3 victory over the Stars this past Thursday.

However, their defense stumbled once more on Sunday, and Joonas Korpisalo allowed six goals on just 26 shots. It was his third straight start, and Korpisalo will continue to patrol the crease with both of his backups on the shelf.

Korpisalo is 3-3-2 on the season, posting a 3.29 GAA and a .899 save percentage, while winger Oliver Bjorkstrand leads the way for skaters with four goals and seven assists in 13 appearances. Columbus is tied-23rd in the league in goals scored per game (2.65) and tied-21st in goals against (3.00).

The Hurricanes are off to a great start of the season, though two of their last three wins came in a shootout. I’m expecting some regression, especially because the Canes haven’t impressed defensively, while their first-choice goalie is sidelined.

James Reimer allowed a whopping 16 goals in his last four outings, so the Blue Jackets should stand a chance if they improve defensively. Columbus is not an elite offensive team, but the Jackets have serious defensive potential. That’s why I think there’s a value on the hosts in this one.

The Blue Jackets have to find their defensive mojo, and Joonas Korpisalo should make the difference Monday after a few mediocre displays. Therefore, I’m looking for a low-scoring affair, while the under has hit in five of the last seven encounters between these two teams.

Columbus cannot expect to beat the Canes on the back of its offense, although Carolina’s defense has been leaky recently. The Jackets need strong defensive performance and a patient approach against the Canes’ talented offense.