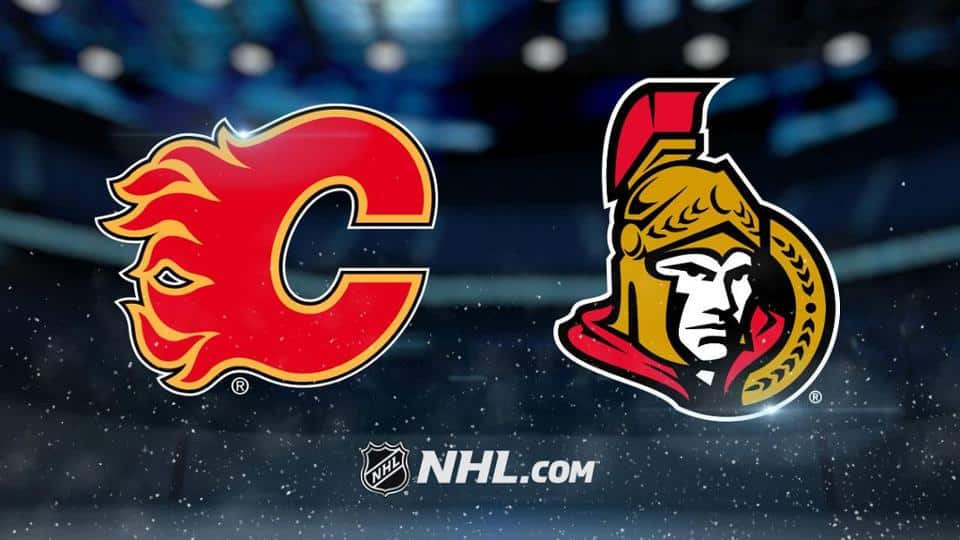 The Calgary Flames and Ottawa Senators meet each other for the first time this season, opening a four-game series Thursday, February 25, so here’s my best betting pick for this North Division clash at Canadian Tire Centre in Ottawa.

The Flames opened as -165 moneyline favorites on PointsBet Sportsbook, while the Senators are listed as +150 dogs to win straight up. Calgary is coming to Ottawa without center Derek Ryan (finger), while goalie Jacob Markstrom (upper body) is questionable to play. On the other side, the Sens are without winger Ryan Dzingel (quarantine) and goalie Marcus Hogberg (lower body), while center Derek Stepan is iffy due to an upper-body injury.

The Calgary Flames (9-9-2) are coming off a painful 2-1 overtime loss at the Toronto Maple Leafs last night. They took the lead with just 3:27 left on the clock in the third period, but two minutes later, William Nylander hit first of his two goals on the night.

The Flames allowed 39 shots to the Leafs and took just 22 in a return. David Rittich had a big game but still dropped to 1-3-1 on the season. If Jacob Markstrom remains on the shelf Thursday, Rittich will get another starting call, and he owns a 2.29 GAA with a .919 save percentage.

Calgary desperately needs more from its offense. The Flames won just one of their last five games, blanking Toronto 3-0 last Monday, as Rittich posted his first shutout of the season along with 34 saves. Calgary scores only 2.50 goals per contest (24th in the NHL) on an 8.7 shooting percentage (23rd).

The Senators continue a five-game homestand, aim for their third straight win

The Ottawa Senators (6-14-1) have won four of their last six games overall including the previous two over the Montreal Canadiens, 3-2 in overtime as +185 home underdogs and 5-4 in a shootout as +180 home dogs.

The Sens took 39 shots in each of those two contests against the Canadiens, showing signs of life on the offensive end. They score only 2.43 goals per game (28th in the NHL) on a 7.4 shooting percentage (also 28th).

Matt Murray has guarded the cage in the last four games and went 2-2-0. He’s 4-9-1 on the season, tallying an awful 3.66 GAA and a .883 save percentage, so the Sens need more from the 26-year-old goalie. Ottawa allows 31.3 shots per game (22nd), and the Senators are nine points behind the playoff spot in the North.

The Flames dropped to the fifth spot of the North Division standings and are two points behind the fourth-placed Canadiens. They have to right the ship in this four-game set against Ottawa, so I’m backing them to get off to a flying start.

Calgary is arguably a much better defensive team than Ottawa. The Flames have the 12th-best penalty-killing percentage in the league (80.6%) while allowing the second-most power-play opportunities (72). On the other side, the Sens went just 10-for-77 with the man advantage (27th in the NHL).

The under has hit in five of the last seven encounters between Calgary and Ottawa, and six of those seven tilts produced fewer than seven goals in total.