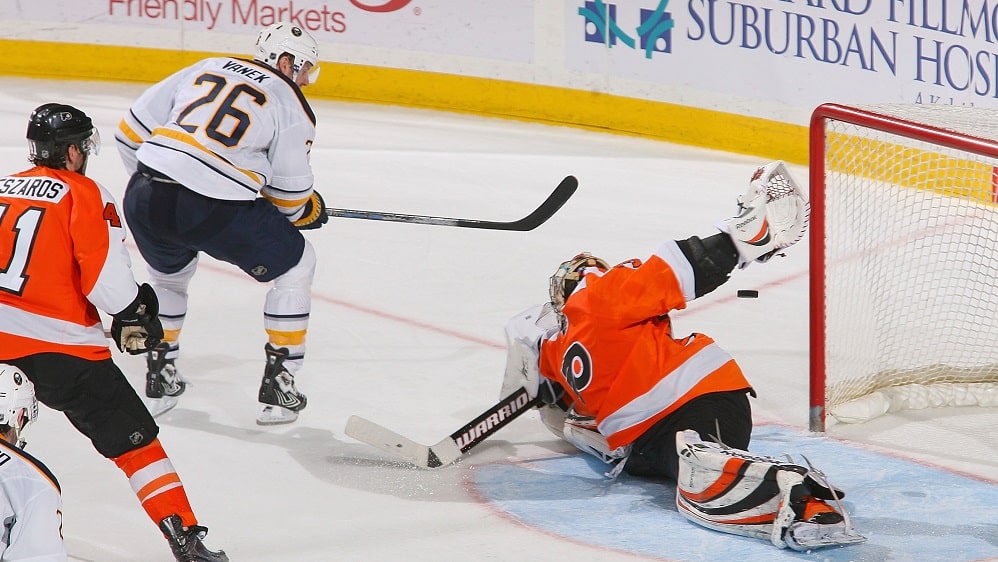 Week 2 of the 2021 NHL season starts Monday, January 18, with ten games on the schedule, so here’s the best betting pick for the East Division showdown between the Buffalo Sabres and Philadelphia Flyers along with the latest odds update on BetMGM Sportsbook.

The Flyers have dominated the Sabres lately, winning 14 of their last 20 encounters including the previous four. Last season, Philadelphia beat Buffalo twice at home, 6-1 as -140 favorites and 3-1 as -220 favorites.

The Buffalo Sabres (0-2-0) started the season with a two-game set against the Washington Capitals at home. They suffered a 6-4 defeat in the opener as +110 underdogs, while the Caps beat them 2-1 as -120 favorites this past Friday.

Interestingly, the Sabres finished the previous season with a 3-2 home win over Washington. However, that is their only victory in the last nine games overall, and the Sabres are winless in five consecutive games away from home.

Taylor Hall has one goal and a pair of dishes on his tally after the first two games of the season, while Jack Eichel accounted for three assists. Carter Hutton guarded the cage in the opener and had 22 saves on 27 shots. Linus Ullmark posted 19 saves on 21 shots in the second clash against the Caps, but Hutton will be the first-choice goalie for Buffalo this season.

The Philadelphia Flyers (2-0-0) opened the season on the right foot, outlasting the Pittsburgh Penguins 6-3 as -105 home dogs and 5-2 as -115 home favorites. They are now 12-2 in the last 14 outings on the home ice in the regular season, and the Flyers haven’t allowed more than a couple of goals in nine of their previous ten home games.

Travis Konecny enjoyed his first career hat-trick in that 5-2 win over the Pens. The 23-year-old winger also had a couple of assists through the first games of the new season. Oskar Lindblom netted two goals, while Joel Farabee and Claude Giroux combined for six assists already.

Carter Hart patrolled the crease against the Penguins, posting 31 saves on each occasion. He’ll be the Flyers’ first-choice goalie this season after going 24-13-3 with a 2.42 GAA and a .914 save percentage this past regular season.

The Flyers have impressed in their first two showings of the season. Carter Hart looks like one of the best goaltenders in the league, while Philadelphia’s offense has dominated the Penguins, so the Flyers shouldn’t have any problems defeating the Sabres if they continue to play in the same manner.

Buffalo has some dangerous offensive weapons, but the Sabres will have a mountain to climb against the in-form Hart. On the other side, the Sabres’ defense is a problem. Last season, Buffalo was allowing 3.12 goals per game (22nd in the NHL).

I was impressed by Carter Hart last season, and the Flyers’ star goaltender is on the way to another impressive campaign. The Sabres have a few top-notch forwards on their roster, but I doubt their chances to score more than a couple of goals, though you never know this early in the season.

The Flyers’ offense looks good, but I expect the Sabres to take good care of their cage after two straight losses at the start of the season. Buffalo needs to be patient, and the visitors will stand a chance of winning this game if they score first. Therefore, I don’t expect to see more than six goals in total.