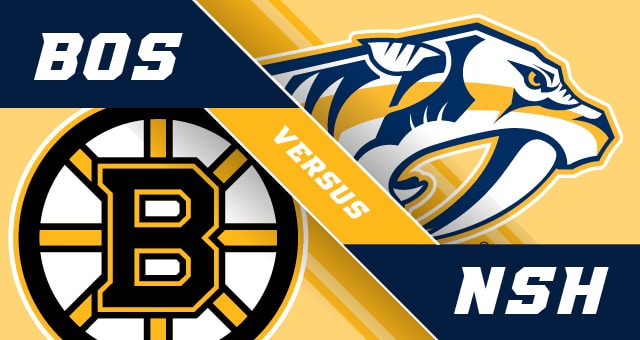 Bridgestone Arena is the site for an enticing showdown as the Boston Bruins pay a visit to Tennessee to face the Nashville Predators. It’s the last time that the two clubs will go at it in the regular season. The game will get started at 8 p.m. ET on Tuesday, January 7, and you can catch this East-West matchup live on New England Sports Network.

Boston currently touts the third-strongest power-play unit in the NHL, as it’s scored on 27.3 percent of its extra-man chances this season. On the other hand, it has the second-best penalty kill in the league, and the team’s successfully killed off a whopping 85.8 percent of all penalties.

David Pastrnak and Brad Marchand will both look to continue their strong seasons for the visiting Bruins. Pastrnak (61 points) has tallied 31 goals and 30 assists, and has recorded multiple points 18 times. Marchand has 20 goals and 40 assists to his creditand has registered at least one point in 31 games.

On the other bench, Nashville is 19-22 straight up (SU) and has lost 12.9 units for moneyline bettors this year. Through 41 regular season contests, 26 of its games have gone over the total, while 15 have gone under and none have pushed. This season, the team’s 10-11 SU at home.

Nashville has converted on just 16.8 percent of its power play chances this season, a figure that’s ranked 24th in the NHL. On the other hand, its penalty kill is ranked 29th overall, and it’s successfully killed off 74.2 percent of all opponent power plays.

The Predators have been penalized 4.0 times per game this season, and 5.0 per game over their past five match ups. The team’s had to kill penalties 13.4 minutes per contest over their last five home games.

Pekka Rinne (23.3 saves per game) has been the primary selection in goal for Nashville. Rinne has 14 wins, 11 losses, and three overtime losses to his credit and has recorded a pedestrian 2.98 goals against average and a fairly-weak .896 save percentage this year.

Roman Josi (14 goals, 30 assists) will pace the offensive counter for the Predators.

Nashville is 1-3 in games decided by shootout. Boston is 0-6 in shootouts.

For both of these clubs, the game went over the total in four of their past five outings.

Four of Boston’s last ten games have been decided by two goals or more. The team is 3-1 in those games.

Boston skaters have dished out the seventh-most hits in the league (23.9 per game), but the team’s recorded just 18.0 hits over their last five away games.