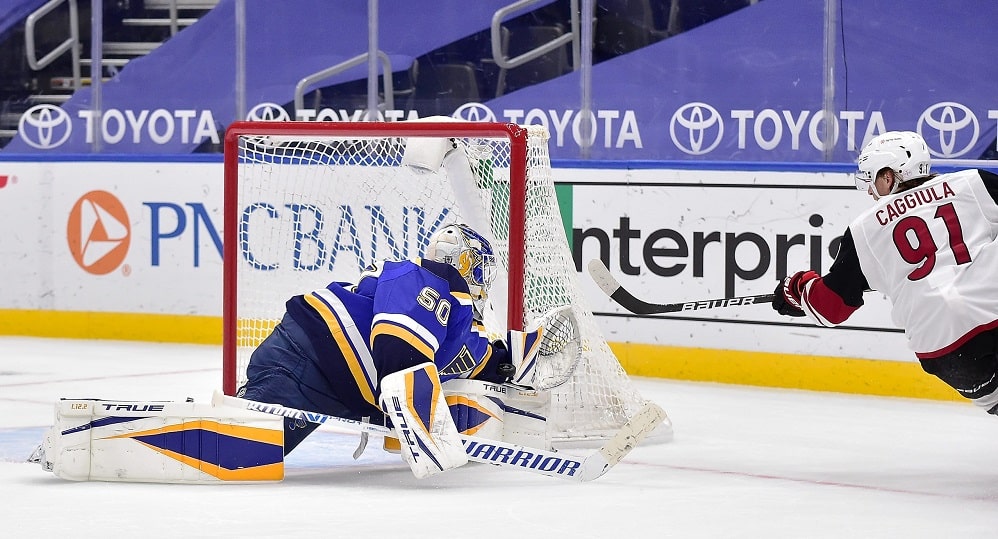 Thursday night brings nine games around the National Hockey League including the West Division showdown at Enterprise Center in Saint Louis, so here’s the best betting pick for the Arizona Coyotes vs. St. Louis Blues clash along with the latest odds on FanDuel Sportsbook.

The Coyotes and Blues will close down their first two-game series of the season. Last Tuesday, the Blues outlasted the Coyotes 4-3 as -160 home favorites. It was their 14th win in the last 20 meetings with Arizona, and the Blues opened as -155 moneyline favorites for Thursday’s game.

The Arizona Coyotes (3-5-1) have struggled mightily on the offensive end over the last few seasons, and it’s no different this term. They are 23rd in the NHL in goals scored per game (2.56), and the Coyotes failed to find the net in two of their first nine games of the season.

Furthermore, the Coyotes are 19th in shooting percentage (8.9%) and 17th in power-play percentage (20.0%). Still, the Coyotes scored exactly three goals in each of their previous two showings, beating Anaheim 3-2 at home and losing at St. Louis 4-3.

Darcy Kuemper guarded the cage in the last seven games and is 2-5-1 on the season, posting a 2.65 GAA and a .905 save percentage. He allowed four goals on 29 shots last Tuesday, but I expect to see him between the pipes Thursday again, as Antti Raanta is having injury problems.

The St. Louis Blues (7-2-1) had some ups and downs in the first two weeks of the season, but they won four straight games over the last nine days, and three of those four victories came on the road. The Blues beat Anaheim twice, 6-1 and 4-1, along with a 5-4 shootout win at the Vegas Golden Knights.

St. Louis is 13th in the league in goals scored per game (3.07). Interestingly, the Blues take just 26.6 shots per game, so their shooting percentage of 12.5 is the fifth-best in the NHL. On the other hand, the Blues have struggled with the man advantage, going only 4-for-32 (25th in the league).

The Blues miss winger Vladimir Tarasenko and center Tyler Bozak due to injuries, so centers Jordan Kyrou and Brayden Schenn lead the way, combining for 11 goals and 11 assists. Jordan Binnington should get another starting nod Thursday after posting 32 saves in that 4-3 win over Arizona, and he’s 6-1-1 with a 2.55 GAA and a .917 save percentage this term.

The Coyotes have one of the best goaltenders in the world, but that’s not helping a lot when none of Arizona players have surpassed a 10-point mark thus far. The Blues are a much better team offensively, so I’m backing them to win straight up.

St. Louis can count on a few top-notch forwards who will hopefully find a way to score three or four goals against Darcy Kuemper. If the Blues put on another solid defensive display, the Coyotes will be in big trouble.

I think the Coyotes stand a chance here only if Darcy Kuemper enjoys a wonderful night between the pipes which is not impossible at all. They have to be patient, but the Coyotes prefer a cautious approach anyway, so I’m betting on the under.

The over is 9-3 in Arizona’s last 12 games overall, and it is 5-1 in St. Louis’ previous six contests, but the under has hit in five of the last six meetings between these two foes. Nine of the last 13 games between the Coyotes and Blues produced five or fewer goals in total.