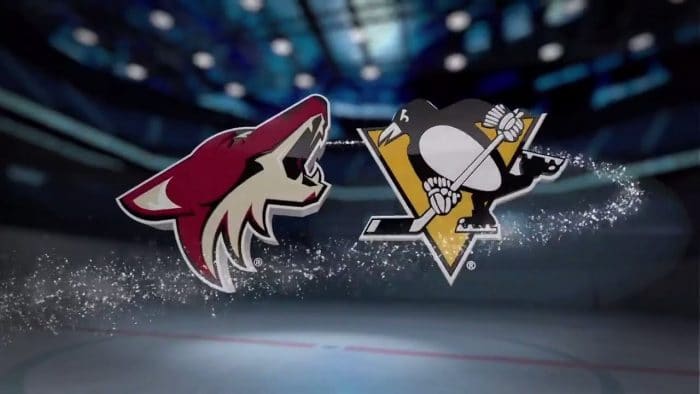 Nick Schmaltz, Clayton Keller, and the Arizona Coyotes will do battle against Jake Guentzel, Evgeni Malkin, and the Pittsburgh Penguins at PPG Paints Arena in a cross-country tilt. The first puck will drop at 7 p.m. ET on Friday, December 6, and it can be caught live on AT&T SportsNet Pittsburgh.

Arizona has converted on 20.7 percent of its power play chances this season, a figure that places them in the top-10 among NHL teams. On the other hand, its penalty kill is ranked 15th out of 31 teams, and the team’s successfully killed off 81.4 percent of its penalties..

Averaging 29.1 saves per game with a .937 save percentage, Darcy Kuemper (12-8-2) has been the primary option in goal for Arizona this year. Kuemper did just play last night, however, so the team could decide to rest him and instead turn to Antti Raanta (5-5-2 record, .924 save percentage, 2.66 goals against average).

Pittsburgh is 15-13 straight up (SU) and has lost 1.6 units for moneyline bettors thus far. 14 of its games have gone under the total, while 13 have gone over and just one has pushed. It’s 11-5 SU at home this season.

The Penguins have converted on just 15.7 percent of their power play opportunities this season, a mark that’s ranked 24th in the NHL. On the other hand, its penalty kill is ranked 13th overall, and it’s successfully killed off 82.7 percent of all penalties.

Matt Murray has stopped 23.9 shots per game as the primary option in the crease for the Penguins. Murray has 10 wins, 10 losses, and four OT losses and has recorded a poor .897 save percentage and 2.84 goals against average this year.

The Coyotes (4-2 in shootouts this season) has more experience in games decided by shootout. The Penguins fell short in its only shootout this season.

Six of Arizona’s last ten games have been decided by two goals or more. The team is 4-2 in those games.

The Pens this season have dished out the second-most hits per game in the NHL (28.8), but that number has risen to 33.2 over their past five home games.

College Football Championship Weekend Betting: So Many Ways To Bet, So Little Time