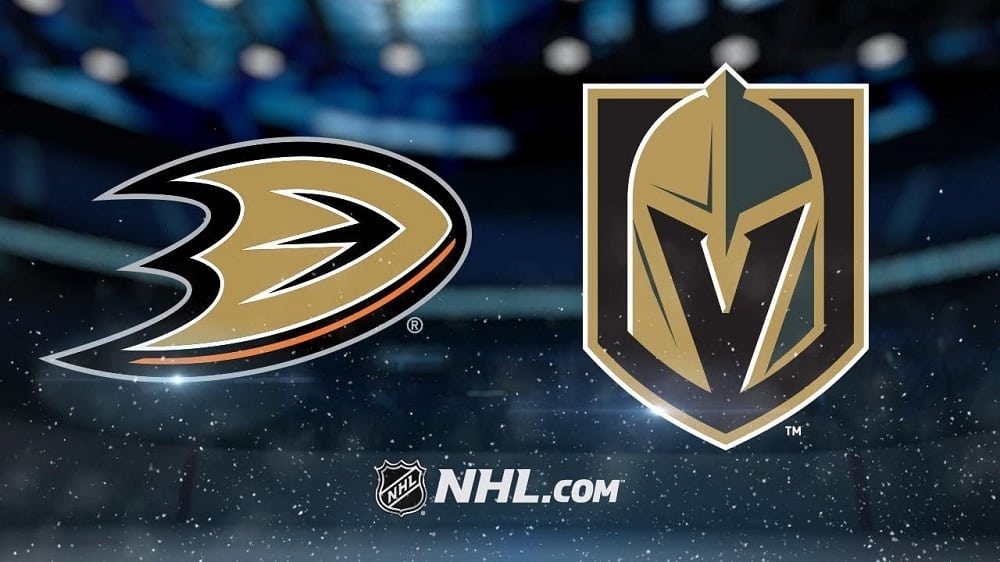 The Anaheim Ducks face off against the Vegas Golden Knights on Tuesday night, opening a two-game series at T-Mobile Arena in Las Vegas, so I bring you the best betting pick for this West Division showdown along with the key tips and stats and the latest odds on PointsBet Sportsbook.

These two teams started the season with a two-game set in Las Vegas, and the Golden Knights beat the Ducks on both occasions, 5-2 as -225 favorites and 2-1 in overtime as -230 favorites. This time, Vegas sits at -228 moneyline odds, while Anaheim is a +204 dog to win straight up.

The Ducks hope to stay on the winning path

The Anaheim Ducks (5-5-3) are coming off a 2-1 shootout victory over the San Jose Sharks, recording their second win in the last three outings. After a 3-1 win at Los Angeles last Tuesday, Anaheim suffered a 5-4 shootout home loss to the Sharks, so the previous seven days were quite exciting for the Ducks’ fans.

Anaheim occupies the fourth spot in the West Division, a couple of points behind the top-three teams and one point ahead of fifth-placed Minnesota. The Ducks are the most inefficient team in the NHL, scoring just 1.88 goals per contest. They allow 2.44 goals per contest, enough for the third-best in the league.

LW Max Comtois leads the way for the Ducks with five goals and one assist in 13 appearances. RW Carter Rowney and C Ryan Getzlaf combined for 11 assists, but both guys are still searching for their first goal of the season. Getzlaf is listed as doubtful to play Tuesday due to an injury.

John Gibson is the first-choice goalie for Anaheim this term, and he’s 4-4-3 on the season, posting a 2.48 GAA and a .918 save percentage. The 40-year-old Ryan Miller guarded the cage last time out, so I expect to see Gibson back in the lineup against Vegas.

The Golden Knights look to extend their dominance over Anaheim

The Vegas Golden Knights (7-1-1) are coming off a two-game set against Los Angeles, outlasting the Kings on both occasions as -260 home favorites, 5-2 and 4-3. They’ve won six of their seven showings on the home ice this term, while the Golden Knights are undefeated in their previous six home encounters with Anaheim.

The Golden Knights have the sixth-best defense in the NHL, allowing 2.64 goals per game. They score 3.64 goals in a return, enough for the third-most in the league, so the Golden Knights should torture the Ducks for another comfortable win.

Anaheim has the best D, but the Ducks have been terrible offensively. They’ve scored only a couple of power-play goals out of 30 opportunities, and the Knights have the eighth-best penalty-killing percentage in the NHL, yielding five goals on 31 opportunities.

Considering the Ducks’ current form, I’m expecting a proper low-scoring affair here. Anaheim will take a cautious approach against the mighty Vegas’ offense, so the first period could be crucial when it comes to the totals.

In that 2-1 overtime loss at Vegas earlier in the season, the Ducks took the lead in the second period and kept their net intact for nearly 59 minutes. It’s always a tough decision to bet on the under when Vegas is playing, but the Ducks could keep it tight. Ten of Anaheim’s last 12 games produced fewer than six goals in total.